Every year, we have to deal with a few new tax laws.

This year the biggie is the Affordable Care Act, known by its acronym ACA or its popular nickname Obamacare.

Millions of us this filing season are reporting our health care coverage to the Internal Revenue Service or figuring any penalty we owe for not having health insurance for all of 2014 or calculating whether we must pay back any of the advance premium tax credit we got to buy a medical insurance policy via a state or federal exchange.

There have been problems. Errors on taxpayer statements issued by the marketplace. Obamacare related scams. That's no surprise, especially with a complex new law that affects so many taxpayers.

But at least there hasn't been a total meltdown as many predicted or feared.

That's probably because most people simply have to check a box on their tax return telling the IRS that they had acceptable ACA coverage last year. 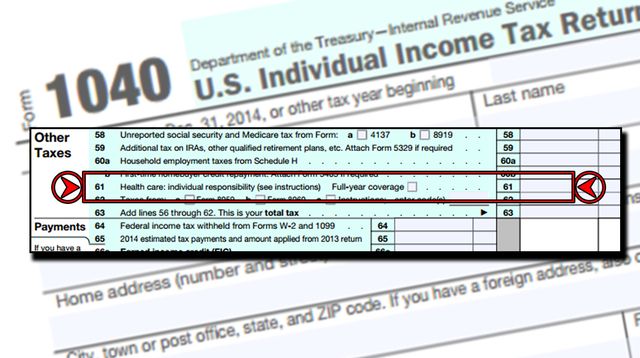 Another possible reason that there hasn't been a rash of Obamacare filing horror stories is that people who might encounter serious problems have pushed off filing until later.

No need for ACA filings: Or some folks simply might be, as I noted last week over at Bankrate.com, exempt from the ACA requirements.

Common reasons for not having to buy health insurance coverage include the inability to find affordable coverage, general hardship (e.g., homelessness, eviction, foreclosure, domestic violence, death of a close family member and unpaid medical bills) or not making enough money to have to file a tax return.

The IRS has a comprehensive chart with the types of ACA exemptions and how they must be claimed or granted. More Obamacare exemption information also can be found at HealthCare.gov.

A new charity deduction, too: While we've known about this year's tax implications of Obamacare since it became law in 2010, there's a new tax provision that was enacted just this month.

The Slain Officer Family Support Act of 2015 took effect April 1. It allows taxpayers who make cash contributions on or before April 15 to charities providing relief for the families of two slain New York City police officers to claim a deduction for their donations on their 2014 tax returns.

As I also noted last week at my other tax blog, New York Police Department Detectives Wenjian Liu and Rafael Ramos were murdered while on duty on Dec. 20, 2014. Since many folks donated to the officers' families after the start of 2015, this special donation deduction law gives them the chance to deduct their gifts as if they were made in 2014.

You can learn more about the special tax rule for these NYPD donations in my post over at Bankrate Taxes Blog.

My additional tax musings at that personal finance site usually are posted on Tuesdays and Thursdays. Every weekend, however, I point out the highlights and links here at the ol' blog.