Apparently some crooks have lines they will not cross. The criminal boundary for a con artist pretending to be an Internal Revenue Service agent was impending motherhood.

Sarah Carr was the target of what the IRS says is the largest tax scam ever, in which individuals pose as tax agents and make threatening phone calls to people. The crooks tell call recipients that they will be arrested if they don't immediately pay an outstanding federal tax bill. 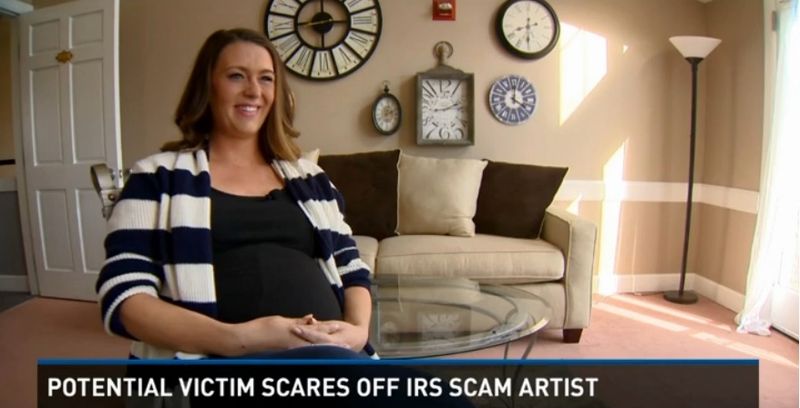 The Broomfield, Colorado, woman got such a message earlier this month on her cell phone. When she called back, the man who answered seemed to know almost every detail about her life and business.

But he missed the biggest one. Carr was pregnant.

Tears turn the tide: When she started crying and told him she was due to deliver in a few weeks, the con artist caved.

Carr said he told her, "I'm sorry, this is a scam. You're OK. We're scamming you. We were just trying to get money out of you. Please stop crying."

And that was that.

Carr got lucky. She avoided a costly interaction with a fake IRS representative.

And in the lead up to and as a new parent, she could be eligible for some even better tax luck, this time from the real agency.

Tax help for new mom's medical expenses: Pregnancy, childbirth and babies can be very expensive. Some of the associated medical costs, however, could count as itemized tax deductions.

Other costs could be paid for out of a medical flexible spending account (FSA). This workplace benefit allows employees to put pre-tax dollars into the account and then use the money to pay for out-of-pocket medical costs, such as co-pays and deductibles, as well as items that aren't covered by insurance.

Since 2013, however, the amount of FSA money available to cover eligible medical costs has been reduced. That year, thanks to a provision in the Affordable Care Act, a $2,500 cap was put on FSA contributions.

In addition, the Obamacare changes made it harder for FSA owners to use the money to pay for over-the-counter drugs. Now a doctor's prescription is needed for off the shelf medications before they can be reimbursed with FSA funds.

Rolling back FSA changes: Recently introduced legislation in Congress, however, would return to the prior FSA rules.

As I noted last week at my other tax blog, the Family Health Care Flexibility Act would reinstate the option to use medical FSA money for over-the-counter drugs. The measure also would repeal the $2,500 limit on employee contributions to an FSA.

Also last week at Bankrate, I looked at a new Pew Research Center survey on taxpayer attitudes about their taxes and tax reform. Most people say their tax system concerns aren't personal.

My additional thoughts at Bankrate Taxes Blog generally are posted on Tuesday and Thursday. If you miss them on those days, check in here over the weekend where you'll usually find highlights and links.