Not a good idea. It simply puts off the possible when it comes to improving our tax system.

That's the word from Bruce Bartlett, who served in two Republican administrations, Ronald Reagan's and George H.W. Bush's, each of which had historic tax connections. 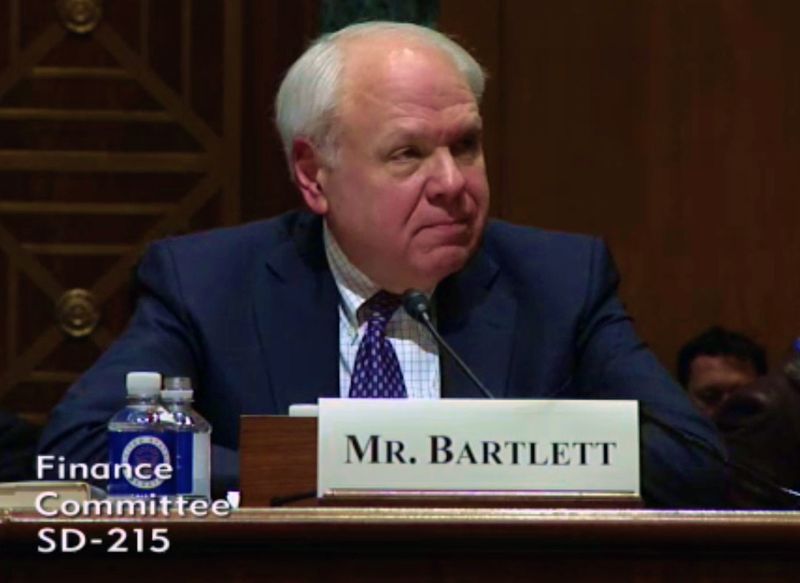 "Doing major tax reform, tearing the tax system out by it roots and starting from scratch has an enormous amount of attraction, but in many cases it prevents us from doing stuff that is doable now, which is to fix glaring problems in the tax code," Bartlett said in his opening remarks before the Senate Finance Committee's tax simplification hearing on Tuesday, March 10.

"The hope of doing a big once-and-for-all reform, unfortunately, has held hostage legislation that is needed and would incrementally improve the code," he added in his written testimony. This stalling is evident when some members of Congress push to delay certain tax changes so they can be used as sweeteners to get fundamental tax reform through the House and Senate, said Bartlett.

Bipartisanship critical: Lawmakers, however, will need more than a few tax treats to complete something as massive as a reworking of the Internal Revenue Code.

Representatives and Senators need to be willing to work together in a bipartisan manner, Bartlett said.

Yeah, never going to happen, at least not in the 114th Congress.

Bartlett, currently a Fiscal Times columnist and blogger focusing on business and politics, noted such an obstacle in his testimony:

"The dream of a tear-up-the-tax code-and start-over-from-scratch reform is very appealing, but it has never been done in our history. Even a reform as big as those in 1969, 1976 and 1986 appears beyond reach in the present political environment."

Currently the R&D tax credit is part of the continually renewed extenders package. This poses not only political problems -- the latest extension came in December 2014, was made retroactive to the full tax year, and then expired two weeks later.

This continual and messy renewal process, specifically with regard to R&D, is that the tax break fails to achieve its purpose of stimulating additional innovation and research and "is instead a reward for what companies would have done anyway," Bartlett said.

Bartlett was just one of four witnesses who spent almost two hours discussing tax simplification with the Senate panel. You can check out the video of the full hearing, as well as read the prepared testimony of all the witnesses at the Committee's hearing Web page.

Senate Finance Committee Chairman Orrin Hatch (R-Utah) and Ranking Member Ron Wyden (D-Ore.) today announced a bipartisan effort to get tax reform ideas from Jane and Joe Taxpayer, as well as from other stakeholders, i.e., businesses, trade associations, industry organizations, advocacy groups, and, yes, even lobbyists. OK, Hatch and Wyden didn't say lobbyists, but you know they will chime in.

The goal is to get additional input, data, and information that can be used by the Senate committee's five bipartisan tax working groups. These groups already are analyzing existing tax law and examining policy trade-offs and available reform options.

"By opening up our bipartisan working groups to public input, we hope to gain a greater understanding of how tax policy affects individuals, businesses, and civic groups across our nation," the SFC leaders said in the announcement of the public comments component. "In doing so, we will also equip our working groups with valuable input, and we hope these suggestions will help guide the groups through the arduous task of putting forth substantive ideas to reform the tax code in each of their areas."

If you have some thoughts, submit your comments via email to the bipartisan group or groups that relate to the area of interest at the following addresses:

More details on submitting tax reform comments can be found at the Senate Finance Committee website.

During the 113th Congress, then House Ways and Means Chairman Dave Camp (R-Mich.), who retired at the end of the last session, and former Senate Finance Chairman Max Baucus (D-Mont.), who resigned his Senate seat to become ambassador to China, did the same.

No word yet as to whether Hatch and Wyden will conduct a national tour a la the Max and Dave Tax Reform Road Show.

I agree with who speaks to the tax burden on senior citizens. The RMD taxes are taking almost all of the interest that my accounts earn for the year. We are encouraged to save for retirement and then have our savings taxed so heavily it is discouraging. I am not in the million plus category, for sure, and am 83 years old. Our SS, as well, as the RMD is taxed. Did we pay taxes on this money already.

Please give more consideration to tax rates for senior citizens who are no longer employed but have made after tax investments and contributed to 401(k)s and IRA's as well and now are being heavily taxed through Required Mandatory Distributions. These individuals, including myself, thought they were doing the proper thing in trying to provide for their retirement and not being a burden on society. Today they are paying a very high price (tax wise) for their thriftiness.

Politics unfortunately includes people who have no interest in serving our country, instead reelection and accepting bribes has become commonplace. This should be addressed.

I have never opposed taxation when it is needed to serve others. Taxation codes that disproportionally serve corporations adding to excessive profit is just immoral. And for a single party to always oppose tax increase no matter the need is just wrong.

Voters need to consider this as they vote. Think about who is hurting who.

A fair appraisal of the tax code that would illuminate waste such as stoic Big Farm subsidies needs to be changed.