It's a dual Groundhog Day this year.

There's the traditional meteorological news, which, by the way, is bad. Punxsutawney Phil says we're looking at more winter. 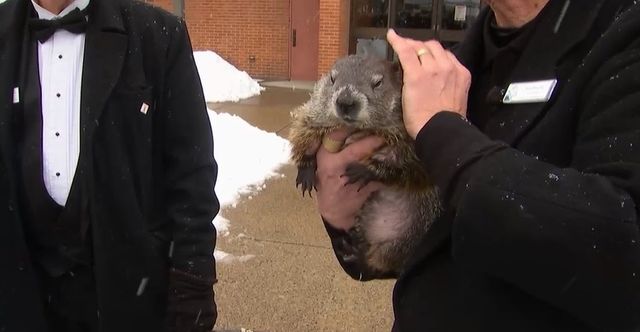 An apparently sleepy Punxsutawney Phil prepares to make his weather prediction. The final word: Phil saw his shadow, so we're in for six more weeks of winter. Full story and video at Weather Underground.

This year, we also get the federal fiscal replay on official Groundhog Day. This is the one where the president issues his annual budget and the members of the opposing political party declare it dead on arrival.

Political process replay: This budget kabuki is particularly intense in the current state of hyper partisanship on Capitol Hill.

"With a growing economy, shrinking deficits, bustling industry, and booming energy production, we have risen from recession freer to write our own future than any other Nation on Earth. It's now up to us to choose what kind of country we want to be over the next 15 years, and for decades to come. Will we accept an economy where prosperity belongs to a few and opportunity remains out of reach for too many? Or will we commit ourselves to an economy that generates rising incomes and chances for everyone who makes the effort?

The ideas I offer in this Budget are designed to bring middle-class economics into the 21st Century. These proposals are practical, not partisan. They'll help working families feel more secure with paychecks that go further, help American workers upgrade their skills, so they can compete for higher-paying jobs, and help create the conditions for our businesses to keep generating good new jobs for our workers to fill."

And then look at the response of Ways and Means Chairman Rep. Paul Ryan (R-Wisc.), whose committee has constitutional authority over tax bills:

"For six years the president has pursued higher taxes and higher spending, and our economy has paid the price. This budget is simply more of the same. The American people are working harder than ever to get ahead, and this administration wants to put up yet another roadblock: $2.1 trillion in new taxes. And despite this massive tax hike, the President's budget never balances, adding $8.5 trillion in more debt. This is simply unacceptable.

I want to work with this administration, and I hope that we can find common ground. But the President has to demonstrate that he’s interested in governing, not just posturing. Tackling big policy challenges -- like expanding American exports and reforming our tax code -- requires not just hard work, but also an appreciation that our economy grows best from the bottom up with empowered individuals, rather than top down through government. We’re going to be focused on an optimistic agenda to move America forward, and I hope the president is willing to rethink his tax-and-spend approach so we can get things done for the American people."

So why does any president, not just the current one, go to the trouble of issuing a budget? Well, aside from the fact that it's required by law, it's also a good wish list, a starting point for possible legislative negotiations, political talking points for each party, and a topic for all us journalists to write about for a day or two.

So here's a look at some of the highlights, particularly those related to personal taxes, in the White House's fiscal year 2016 budget proposal.

Budget price tag: First, the FY16 budget's overall cost is around $4 trillion in spending. That would be offset by just more than $3.5 trillion in revenue, leaving a deficit of $474 billion for the fiscal year beginning Oct. 1 and ending Sept. 30, 2016, which happens to wind up the last fiscal year of the Obama presidency.

The FY16 budget also calls for reversing the $74 billion in government programs that were implemented under sequestration cuts four years ago, referred to in the budget as "mindless austerity."

And it generally raises revenue from new taxes on the wealthy and big business to help pay for proposed tax breaks for middle-class households.

Now for those tax planks, some of which you've seen in previews to the 2015 State of the Union and in prior Obama budgets.

The child tax credit would go from $1,000 per eligible kid to $3,000 and become partially refundable.

Parents would get more help in covering day care costs with an expended child tax care credit. The idea of expanded child care tax help also was floated in Obama's 2015 budget. The new help, however, would come at a cost. Obama wants to repeal workplace dependent care flexible spending accounts in conjunction with the increased child and dependent care credit. The Administration's proposed change also would provide a larger credit for children younger than age five.

Working married couples, with or without kids, would get a new $500 tax credit. And for the child-free population, the Earned Income Tax Credit for low-income workers without progeny would be expanded.

Capital gains: The Administration wants to hike the top capital gains tax rate to 28 percent. It now technically tops out at 20 percent for higher earners, but effectively is more than that, an estimated 25 percent, thanks to various surcharges that affect wealthier taxpayers.

Sin tax increase: The White House wants to nearly double taxes on cigarettes and small cigars from around $1 per pack to almost $2 per pack. The tax also would be indexed for inflation.

This is a revenue raising proposal, with part of the new smoking tax money going toward an extension of the Children's Health Insurance Program, or CHIP, which expires at the end of 2015 if Congress doesn't renew it. The health care program for kids usually provokes a battle on Capitol Hill.

Foreign funds for U.S. roads: There's much concern that the federal gasoline excise tax, which has been 18.4 cents a gallon since 1993, is not adequately paying for America's much needed road repairs. Obama is suggesting a tax detour.

The Administration's FY16 budget calls for two new foreign income taxes. There's a 19 percent minimum tax on foreign earnings of multinational companies. More on this in a future post, I threaten promise.

But a second, one-time 14-percent tax on earnings accumulated in controlled foreign corporations would be used to pay for the White House's surface transportation proposal.

The dire status of America's roads, infrastructure, and some mass transit programs has prompted support for new dedicated transportation taxes from some Republicans, so this or something similar might actually make it into law. Note that I said "might."

These are just a few of the budget proposals. I'll look at more of them here and also at Bankrate Taxes Blog in the coming days.

If you just can't wait, you can check out the explanations of the Fiscal Year 2016 budget proposals in the Treasury's Greenbook.