The Internet has made the world a much easier place, especially at tax time. E-filing, for example, continues to set records each year.

The Internet also has made the world a much more dangerous place, especially at tax time.

Take last week, for example. Identity theft and subsequent tax fraud got a lot of attention in two states because of individuals' personal information being used or at least exposed to identity thieves.

Minnesota Department of Revenue officials stopped taking returns electronically filed by TurboTax users. Intuit, manufacturer of the popular tax software, opted to halt e-filing returns in all states for about a day out of an abundance of caution.

All filings were back on track Friday, Feb. 6, afternoon. There was no breach of TurboTax information; the problem appears to be with taxpayers' personal data that was appropriated elsewhere.

Meanwhile, in Connecticut the state's top tax officer last week advised taxpayers who may have been affected by the data breach at Anthem, the largest insurer in the Nutmeg State, to file their taxes as soon as possible.

"The personally identifiable information apparently hacked at Anthem is exactly what tax fraud thieves use to make false refund claims that appear to be legitimate," said Department of Revenue Services Commissioner Kevin Sullivan. Sullivan is suggesting that residents beat tax ID thieves to the punch.

And now there's a possible inadvertent distribution of some personal data in the Sunshine State.

Bush email bonanza: Former Florida governor Jeb Bush, a possible contender for the Republican presidential nomination in 2016, has released all the emails he received while in office. That's hundreds of thousands of communications from 1999 through 2007. 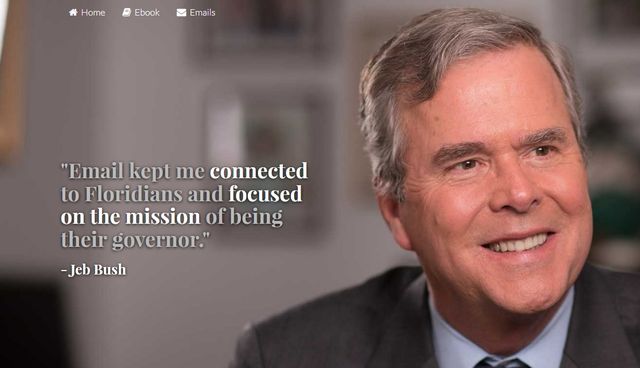 Bush said he released the messages in the name of transparency. That's all fine and well for a politician who grew up in the public eye and who's gearing up for extraordinary scrutiny if he does run for president.

But some Florida residents are feeling a bit over-exposed by Bush's move.

The emails on Bush's website are not redacted. Some include home addresses, phone numbers, medical information and even Social Security numbers of the former governor's former constituents.

All that information out there. On one website. OK, on several pages, since Bush gives viewers the option to sift through five different time periods.

Federal, not state, tax ID worries: The good news for Florida taxpayers is that since they don't have a state income tax, they don't have to worry about any of this data being used to file fraudulent state returns.

The bad news for Florida residents is that many of them must file federal tax returns. Could tax identity thieves beat them to the IRS with the info available on Bush's website? Possibly.

Florida already is recognized by tax and law enforcement officials nationwide as tax fraud central. Using stolen IDs for fake outrageous tax refund filings has replaced other crimes as the prime illegal money maker in much of the state.

I've no doubt that the folks already engaged in such illicit tax activities will be happy to use whatever info they can glean from the Bush emails to further their criminal tax-filing enterprises.

Over-exposed residents: The Verge, which broke this story, notes that in his former gubernatorial email signature line Bush tells writers that "Florida has a very broad public records law" and "your email communications may therefore be subject to public disclosure."

Fine. I'm all for public agency sunshine laws in the Sunshine State and elsewhere. If someone, say a reporter, wants to see what folks were corresponding about with the gov, let that journalist take a look and write about it.

But I doubt that few if any of the emailers expected all that they wrote to be dropped onto the Internet so publicly.

My Bush writings: I know I wrote Poppy Bush a letter, an actual pen to paper document, during his presidential campaign of 1988. I'm sure the Secret Service has some record somewhere of my complaints to George H. W. Bush.

And I shared some thoughts with the other George, Bush 41's son and my fellow adopted West Texan W, at various times when he was the 43rd man to occupy the Oval Office. Secret Service file redux.

But I'm wracking my brain as to whether I ever emailed Jeb while the hubby and I lived in Florida. As unbelievable as some of you might find it (that's the hubby you hear laughing in the background as I type), I know Jeb ticked me off enough a couple of time that I might have headed to my computer to express my outrage.

I'm pretty sure I didn't share any more than our old Palm Beach Country home address, my email (which I think was via AOL back then) and possibly our land-line phone number. So I'm not too worried. But I plan to peruse the emails this evening just in case.

Some of my former Florida neighbors, however, weren't as discreet. And they could have a real cause for concern.

So I suggest that they follow the federal version of the Connecticut tax office's recommendation and get their 1040s to the Internal Revenue Service ASAP. Just in case.