The adage that those who don't know history are destined to repeat it definitely applies to taxes. So that we -- and by we, I mostly mean our lawmakers and the Internal Revenue Service -- don't make the same tax missteps in this fresh new year, it's good to look at what happened in taxes in 2014. 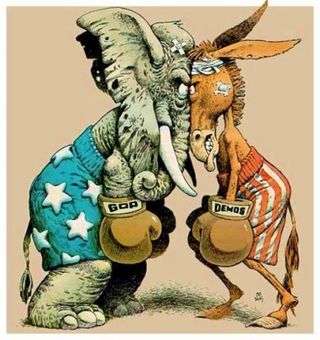 The one word that best sums up the tax world last year was combative.

IRS personnel, including the agency's head honcho, fought with Congress.

Members of Congress fought with each other over what was or was not discovered in myriad IRS investigations.

Heck, Congressional committees helmed by the same party even fought with each other over which one had more jurisdictional status when it came to IRS inquiries.

It wasn't pretty, but at least it's over.

1. Tea Party vs. IRS continuation
It all started with the release of a Treasury Inspector General for Tax Administration report in May 2013, but it continued through 2014. "It" is the Internal Revenue Service's tax exempt division's use of questionable tactics in reviewing applications by groups seeking favorable 501(c)(4) tax-exempt status.

The tax agency looked long and hard at all types of groups, but Tea Party and other conservative organizations took the most umbrage, as did federal lawmakers who shared similar political and social philosophies. So the issue simmered, occasionally hitting a boil, throughout 2014. It died down a bit after the midterm elections, but likely will pick up again under a Congress now in total Republican control.

2. Lois Lerner remains mum
Lois Lerner, the IRS employee at the center of the 501(c)(4) review scandal, wasn't as prominent last year as in 2013 when the situation came to light. Still, the woman who headed the IRS' Exempt Organizations division until being forced out of the job in 2013 remained the focus of conservative groups' and politicians' ire in 2014.

In fact, we got a replay last March of Lerner invoking her Fifth Amendment right as she had done months earlier, and refusing again to testify before the House Oversight and Government Reform Committee. Even without her presence at the IRS or Capitol Hill hearings, questions about what Lerner knew or did in connection with tax-exempt application reviews continued to crop up every time the issue was discussed, officially or unofficially.

3. Still looking for lost emails
The questions about Lerner's involvement in the review process were intensified when it was learned some of her potential emails on the matter had been lost in a computer hard drive crash. That revelation last June by the IRS set off a new round of conspiracy theories. The amount of incredulity was compounded when a few months later when the IRS announced that emails of five other employees connected to the agency's alleged targeting of conservative groups also were lost during the tax-status review period in question.

Coming full circle, as 2014 wound down, TIGTA said it just may have a way to recover the missing electronic missives. So we head into 2015 with a possible major resolution -- or not -- of who said, wrote and/or did what about which groups seeking tax-exempt status.

4. Koskinen goes toe-to-toe with GOP Representatives
2014 marked IRS Commissioner John Koskinen's first full year as head of the beleaguered tax agency. He seemed to spend almost as much time in Congressional hearing rooms as in his Constitution Avenue office. And it was clear from Koskinen's first time testifying as the IRS' new leader that he was not going to back down when confronted by hostile Republican lawmakers.

That just irked the GOP members of Congress more … and more and more every time the commish came to the Hill. During one particularly contentious exchange last summer, then-House Ways and Means Chairman Dave Camp (R.-Mich.) accused Koskinen of "mislead[ing] the American people. You say that you have 'lost' the emails, but what you have lost is all credibility." Fellow Republican and now new Ways and Means Chairman Paul Ryan (R-Wisc.) charged that the agency was abusing its power, and told Koskinen, "I am sitting here listening to this testimony, I don't believe it. That's your problem. Nobody believes you."

5. Congressional investigation overlap and infighting
The whole 501(c)(4) mess has been made, well, messier because of the involvement of multiple committees on both sides of Capitol Hill. Among those looking into the issue were the Senate Finance Committee, the Senate Homeland Security and Governmental Affairs Permanent Subcommittee on Investigations, the House Ways and Means Committee, and the House Oversight and Government Reform Committee.

While the chairmen of all panels say they just want to get to the truth, they also seemed last year to want to be the first ones to discover, depending on the political leanings of the leaders, the smoking gun that would nail the IRS or the evidence that would exonerate the tax agency.

Even when committees shared the same goal, there was jockeying for the upper investigatory hand. Witness last June's House Ways and Means and Oversight sessions in which Koskinen elaborated on how the agency lost the infamous emails. Camp announced a Tuesday morning session. So then-House Oversight and Government Reform Committee Chairman Darrell Issa (R-Calif.) sneaked in an unusual Monday night session, grilling the IRS chief for more than three hours, in order to beat his GOP colleague to the questioning punch.

Partisan politics in the IRS investigations hit their nadir in March when, following a failed attempt by the House Oversight and Government Reform Committee to re-interview Lerner, Issa refused to let the ranking Democrat, Elijah Cummings of Maryland, speak. Literally. Issa abruptly adjourned the hearing and had Cummings' microphone turned off..

That lack of decorum upstaged the continued refusal of Lerner, who already had been held in contempt of Congress. It also reflected so poorly on Issa that the usually indefatigable lawmaker ended up apologizing to his Democratic colleague.

6. Tax-related lawsuits
America is a notoriously litigious society and in 2014 taxes were the basis for a variety of lawsuits. On Tax Day 2014, the Republican National Committee filed a suit against the IRS accusing it of failing to respond to a request for documents about the review of organizations seeking tax-exempt status. Yep, the 501(c)(4) issue moved in 2014 from Congressional hearing rooms to the courtroom.

A couple of tax-exempt lawsuits were resolved last year in the IRS' favor. Judge Reggie Walton of the U.S. District Court in Washington ruled in August for the tax agency in two similar but separate cases brought by conservative groups. Walton found in each case that because the IRS changed how it considered Tea Party applications for tax-exempt status and approved most of the groups involved in the lawsuits, the organizations had no reason to sue.

The IRS also came out on top in a lawsuit filed by the American Institute of CPAs. The professional accountants' organization had sought to stop the agency's program offering voluntary education and testing of non-credentialed tax preparers. Judge James Boasberg of the U.S. District Court in Washington dismissed the AICPA filing on the grounds that the organization lacked standing and would not be harmed by a voluntary program. In an interesting twist, Boasberg was the judge who ruled against the IRS' mandatory testing proposal in 2013's Loving v. IRS case. The new voluntary testing system takes effect with the 2015 filing season.

The biggest tax-related lawsuit will be decided by the Supreme Court of the United States this year. The High Court decided last November to hear one of the federal appellate court cases involving the Affordable Care Act, or Obamacare, premium tax credit. In agreeing to hear King v. Burwell, the justices will decide whether the tax credit applies only to consumer marketplaces run by states (16 total) and not in the 34 states which rely on federally operated sites.

Since most ACA purchases have been made via the federal Healthcare.gov with many of those individuals getting associated federal tax credits, the eventual Supreme Court ruling will legitimize or jeopardize millions of dollars in subsidies. Oral arguments are set for this March with a decision expected in June.

7. More IRS ACA involvement
2014 was the first year that the IRS got deeply involved in Obamacare. As millions purchased their mandated health care policies, the IRS was tasked with making sure that people understood their responsibilities.

The agency was busy throughout the year issuing alerts on minimal essential coverage, potential coverage exemptions, and why it's critical for policy and subsidy recipients to report and life changes that could affect their tax break. We'll find out how well the IRS did its job this filing season.

8. IRS budget cut again
Meanwhile, the IRS has had to make do with less money and fewer staff as it deals with its new ACA duties along with regular tax compliance and enforcement tasks. For fiscal year 2015, which began Oct. 1, 2014, the IRS is working with $10.9 billion. That's $600 million less than its $11.3 billion FY2014 budget and close to a billion below its 2013 fiscal budget.

9. Biggest tax scam ever
When tax season rolls around, so does tax scam season, with crooks employing myriad ways to get taxpayers' personal identification info so they use it to commit tax-refund fraud. But the biggest tax scam of 2014 was a plain old extortion effort.

Con artists spent most of last year pretending to be Internal Revenue Agents, calling folks nationwide and demanding money they claimed that the call recipients owed Uncle Sam. They crooked callers demanded the fake tax debt be delivered via prepaid debit cards or they threatened fearful taxpayers with jail time or, in the case of immigrants, deportation.

The IRS declared this the largest tax con ever. Before 2014 ended, it had filtered down to the state tax level, too.

10. Extenders extended at last minute
Finally, we have the extenders, which were literally the last piece of legislation to make it through the 113th Congress. These 55 or so individual and business tax breaks that expired on Dec. 31, 2013, were renewed retroactively for the full 2014 tax year. But that lame duck renewal didn't come until Dec. 3, 2014, in House and Dec. 16, 2014, in Senate, meaning that two weeks later, the laws were dead again.

Luckily for taxpayers, the IRS was able to adjust and will start the coming filing season on time. It's likely to still be a mess, but it will all begin Jan. 20, so mark your calendar.

That's no way to do business, on Capitol Hill or anywhere. But that's how the House and Senate have been doing business for years. We'll see if our federal lawmakers can break this bad habit in 2015.