What the most important policy issue to you this year? 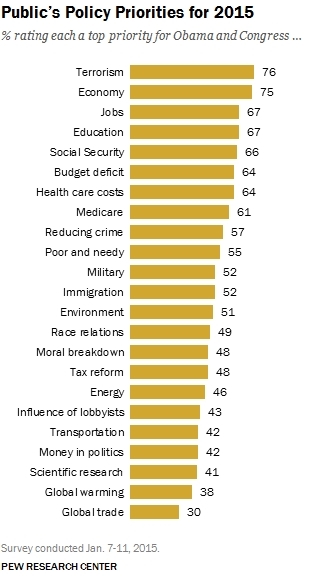 According to a recent Pew Research Center survey, it's defense against terrorism.

Seventy-six percent of those who responded to Pew's annual policy priorities poll named terrorism as their top concern.

It is the first time in five years that Americans have focused so much on terror, probably in large part because in recent months violent attacks have been in the news. The poll was conducted between Jan. 7 and Jan. 11.

The move to the top spot, however, is not totally unexpected. Pew notes that there has been little change over the past two years in the number of folks who say that defending against terrorism should be a top priority. Terrorism has, in fact, consistently been among the public's leading policy goals since 2002.

It moved to the top of this list this year as the other perennial concern, the U.S. economy, has been picking up lately.

Still, nearly as many Pew survey respondents said they want the country's leaders and policy makers to keep a close eye on the economy. It came in second on the 2015 survey, just a percentage point behind terrorism.

Since Barack Obama began his second term in January 2013, note Pew pollsters, the economy has declined 11 points as a top priority. Similarly, the improving the job situation has fallen 12 points, from 79 percent to 67 percent.

And where did taxes come out in the latest survey?

Tax reform ranked 12th this year, tied with moral breakdown. Only 48 percent of the Pew survey respondents said overhauling our tax code should be a top Congressional priority in 2015.

Still, because I'm a tax geek and in charge of the ol' blog's By the Numbers feature, 48 percent gets this week's honor.

Maybe if lawmakers actually start seriously considering some tax changes -- and President Obama will toss out a few tax ideas in his State of the Union address on Jan. 20; more on those proposals in tomorrow's a future post -- the tax reform topic will move up the list on the next Pew survey.