St. Louis pro football fans have no team in the current National Football League playoffs, but they are being treated to an exciting competition to house the Rams.

Less than a week after Rams owner Stan Kroenke announced plans to build a new NFL stadium near Los Angeles, a task force created to keep the Rams (or another pro football team) in the Gateway City offered an architectural counter proposal.

The good news for football fans in both cities is that the planned facilities will be built without any new taxpayer money. 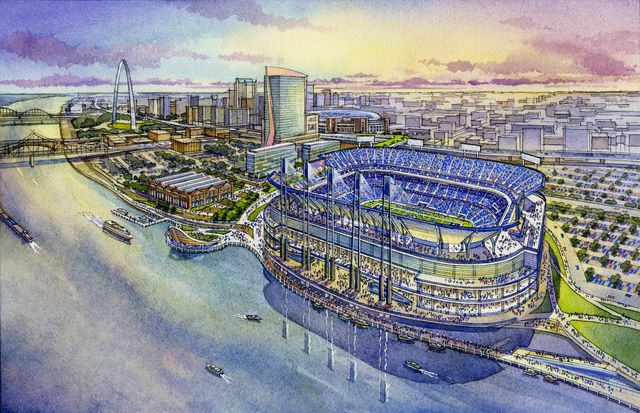 Suitors for a bad team: Rams fans have suffered through years of bad-to-mediocre team performances, but no city wants to lose a major league franchise. The LA area, meanwhile, has been without an NFL team for 20 years.

On Jan. 5, Kroenke and Stockbridge Capital revealed plans for an 80,000-seat stadium at Hollywood Park in Inglewood, California. They pledge to fund the stadium out of their own pockets. No figures were given for the state-of-the-art facility at the former suburban LA horse racing track, but estimates are that it could be near $1 billion.

The new St. Louis field has a similar price tag, between $860 million and $985 million. The stadium would be the centerpiece of a development on about 90 acres on the Mississippi riverfront north of downtown.

It would be a public asset, owned by a public entity such as the St. Louis Regional Convention and Sports Complex Authority, and would be leased to the Rams or another NFL team. There also would be an option to sublet to a possible Major League Soccer franchise.

Construction on the St. Louis stadium could begin in 2016, with completion expected in time for the 2020 NFL season. No timetable was given for the Los Angeles proposal.

That lead time is fine, since the NFL also announced last week that no franchises would relocate before the 2015 season. The NFL acknowledged rumors about the league returning to La-La Land by also noting that it won't sign off on a franchise move to L.A. until a permanent site is established.

Taxes, we don't need no stinkin' taxes: Now about that no new public money pledge.

David Peacock, a former Anheuser-Busch executive who's leading the St. Louis stadium task force, pledged that there would be no new tax burdens on the St. Louis area or Missouri.

"The task force is confident that the money is available in such a way that it will not add an incremental burden on the community." said Peacock.

Sorry for repeating myself, but yeah, right.

The plan is to take advantage of current low interest rates and refinance and extend the public bonds that voters approved for the Rams' current home, Edward Jones Dome. That would cover $300 million to $350 million of the new stadium's cost.

Another $15 million to $25 million would come from existing Missouri Development Finance Board funds. Brownfield tax credits, federal benefits available for improving blighted areas, would account for between $25 million to $30 million.

That would bring the public financing component of the new St. Louis NFL field to as much as $405 million. That figure earns this week's By the Numbers honor.

Fans who buy season tickets to the NFL games would contribute up to $130 million in seat licenses. I'm sure those buyers who already overpaid a collective $400,000 or so in sales tax on their Rams' tickets in prior years will be happy to hand over this new seat fee.

The St. Louis stadium folks also expect up to $250 million from the Rams owners, along with a $200 million check promised by the NFL.

That accounts for a possible $985 million to pay for land, demolition of structures now on the property, stadium construction, parking and infrastructure upgrades.

Added public services, and costs: Ah, yes, infrastructure. Anyone who's ever been to an event at a major league sports facility knows that getting in and out of the stadium-arena-ballpark-racetrack is critical.

Expanded roadways are needed for easy entry to and exit from the sporting event, along with public water system upgrades to handle all that new plumbing, and added electrical transmission operations to keep the Sunday and Monday night televised games going under the lights. 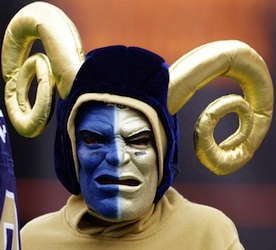 And anyone who's ever lived in a city or area where a new sports facility has gone up knows that they eventually end up paying at least some of those ancillary infrastructure costs because no project ever comes in under budget.

Maybe the taxpaying stadium etc. neighbors do benefit from the upgrades, too. I hope so.

But it's also disingenuous for leagues, team owners and politicians who support such plans to say that taxpayers will not bear any new costs of a sports stadium.

We may be big sports fans, but we're not idiots.

gonna be sad, when the LA factor kicks in with the owners