Men, women & taxes: Are there differences in filing, careers?

I generally try to stay away from gender stereotyping. Such sweeping observations present, at best, an overly broad, and frequently incomplete, look at groups. At worst, they are flat out offensive.

Maybe that's why I was drawn to taxes as a professional focus.

It's impossible to make a sweeping statement about all taxpayers or all tax laws. Taxes are intensely personal. Specific details are necessary so that individuals can make the best decisions for their situations.

Taxes also are, for the most part, egalitarian. The tax collector doesn't care whether you're a man or a woman. Tax departments, both federal and state, just want to know much taxable money you accumulated and then ensure that you pay your legally required share.

More tax women: That said, I find it interesting that women are making inroads in the tax field.

It's not unusual that women are a bit behind when it comes to taxes and, in fact, in all financial areas. For generations, men handled more money matters, both making, saving, investing and spending it.

But we're getting there when it comes to taxes, albeit slowly.

To support that suggestion, TaxTalent points to the findings in its 2015 Women in Tax report. Among its findings:

IRS gender leadership: The bright side for women in tax is in the public sector, specifically within the Internal Revenue Service.

"Despite men outnumbering women in the corporate and public accounting sectors, it appears that the IRS attracts the greatest number of female candidates, specifically in the roles of Tax Examiner, Tax Collector and Revenue Agent," according to the latest TaxTalent report. 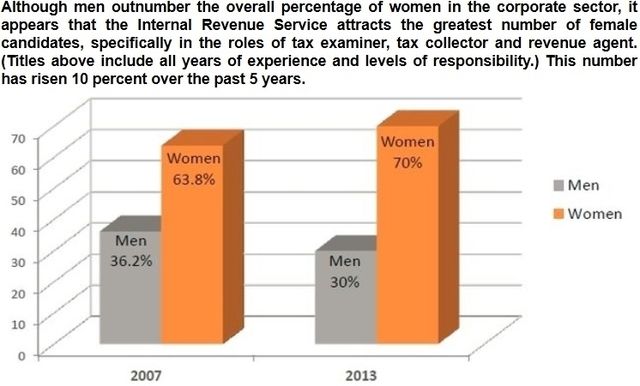 Unintended Congressional contribution: Some skeptics might say the increase in female IRS employees might be due to Congressional pressure.

No, the House and Senate are pushing the IRS to be more diverse, particularly when it comes to women. Rather, Congress keeps cutting the agency's budget, forcing it to freeze hiring. Meanwhile, the workforce is aging, with many of long-time IRS employees likely to be men who also are opting to retire.

As those men leave and aren't replaced, that could shift the male-female numbers, helping statistically increase the position of remaining women at the agency.

Whatever the reason, though, the IRS is to be commended for letting women take lead roles. Here's hoping the agency's private sector counterparts start doing a better job when it comes women in professional tax positions.

Women and tax shelters: Tax decisions made by women in high-level corporate financial posts were discussed last week at my other tax blog.

A recent study found that women chief financial officers are not fond of tax shelters. When a company has a woman in charge of finances, the probability of it adopting a tax shelter is 17.4 percent lower than for firms with male CFOs.

Also over at Bankrate last week, I looked at an email touting erroneous 2015 tax law changes.

I typically post my additional tax thoughts at Bankrate Taxes Blog on Tuesdays and Thursdays. If you miss them there, check for highlights and links here the following weekend.