The 2015 tax filing season is underway and for most of us, that means detailing our wage income on our 1040s.

While workers' pay still is the dominant type of income reported to the Internal Revenue Service, a recent Tax Policy Center analysis notes that wages and salaries have lost some of their dominant share over the past six decades. 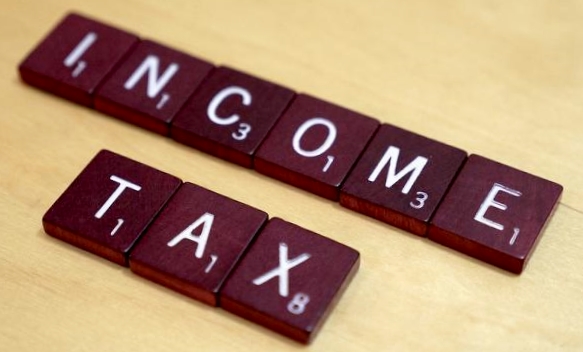 From 1952 through 2012, write Roberton Williams and Lydia Austin in the Dec. 22, 2014, issue of Tax Notes, capital gains and other nonbusiness income have grown in relative importance.

Here are the income sources reported by taxpayers back in 1952: 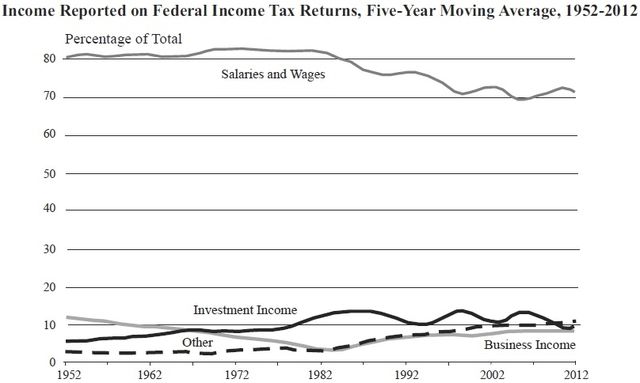 Wage and salary income, note the authors, maintained its sizeable share through the mid-1980s, but lost ground relative to other income sources over the last 30 years. It fell to 71 percent in 2012.

Meanwhile, note Williams and Austin, the share of business income fell steadily for three decades to just 3 percent in the early 1980s, before recovering to about 9 percent of total income in 2012. The authors suspect much of the gain since 1980 came as more businesses became pass-through entities, with that income being reported on individual rather than corporate returns.

The share of income coming from all other sources drifted upward over the six decades, more than tripling to 12 percent in 2012.

Increasing investment income: And folks who were able to let their money work for them also saw increases in recent years.

Investment income grew steadily through the mid-1980s, more than doubling its share to 13 percent in 1985, according to the analysis.

Virtually all of that growth came from interest, whose share of income soared from 1 percent in 1952 to nearly 8 percent in 1983, when interest rates soared. During the same period, dividends were at about 3 percent of income and capital gains accounted for 2 percent.

More recently, however, plummeting interest rates have reduced that income source share back to its 1952 level of just 1 percent. Dividends also have dropped bit, to 2.5 percent.

That leaves capital gains ruling the investment income segment. Most folks who've recently received a 1099 with earnings details can attest to that.

As part of Obama's middle-class tax relief plan that he discussed in his latest State of the Union address, the current top capital gains rate, which also applies to certain dividend earnings, would go from 20 percent to 28 percent for higher-income taxpayers.

It would be the second increase in two year. As part of the American Taxpayer Relief Act of 2012, enacted on Jan. 2, 2013, the top capital gains tax rate when from 15 percent to 20 percent for wealthier investors.

Because of the Administration's persistence in this tax area, 28 percent is this week's By the Numbers figure.

Tough tax hike fight ahead: Obama has stressed this his latest 28 percent proposal would simply bring that top tax on capital gains and qualified dividends  back to the rate it was under President Ronald Reagan.

The invoking of the Republican icon has done little to sway GOP lawmakers to the prez's way of thinking here.

Obama also is fighting history in trying to increase the capital gains tax rate. For almost as long as he's been collecting taxes, Uncle Sam has taxed capital gains at a lower rate than wages.

Lower capital gains taxes were enacted following World War I. The fear was that high taxes on capital gains would prompt people to simply hold onto their investments, restrict the flow of capital and reduce revenue, according to the Encyclopedia of Taxation and Tax Policy.

Double-tax opposition: William McBride, an economist at the conservative Tax Foundation, says a lower capital gains tax rate is only right. He told Fox News that it's unfair to tax income more than once, and capital gains are taxed multiple times.

If you got the original investment from wages, that money was taxed, says McBride. If the stock you own gains value because the company you invested in makes a profit, those profits are taxed through the corporate tax. And if that company issues dividends, those are taxed as well.

Chuck Marr, director of federal tax policy for the liberal Center on Budget and Policy Priorities, counters that says lots of people, not just investors, are double taxed.

"Check out your last pay stub," March told Fox News. "There's income tax and payroll tax, so you're double taxed, too." Plus, Marr noted that most people pay sales tax on purchases.

Given that the Republicans are in control of both the House and Senate now, I wouldn't bet on the capital gains tax increase happening. But then, I didn't see the hike coming back during the fiscal cliff debates.

Double tax coverage: The capital gains/dividends tax hike is just one part of Obama's State of the Union tax test for Congress, as I discussed last week at my other tax blog.

Also over at Bankrate Taxes Blog last week, I looked at Wal-Mart's offer of tax cash refunds this filing season.