Mortgages offer nice tax breaks, but in limited parts of the U.S.

Back in 2008 when the housing bubble burst and the financial crisis began, homeowners were literally walking away from their residences. Predatory lenders lured unqualified buyers with subprime mortgages that backfired horrendously for financial institutions and homeowners alike.

Those who managed to stay in their homes were deep underwater on the mortgage loan amount.

It seemed for the last five or so years that the American homeownership dream, while not dead, was on life support. 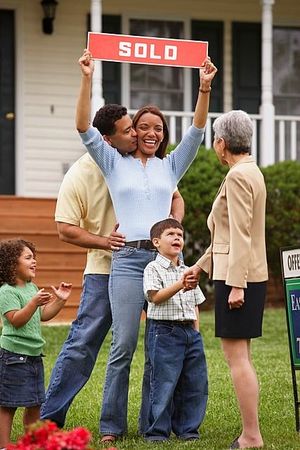 The patient, however, appears to be making a recovery.

Housing markets are picking up in some parts of the country. A recent survey by housing giant Freddie Mac found that the vast majority of Americans who do not own a home still see homeownership as a worthy goal.

And some of those folks might soon be in their own places thanks to a decision by Freddie Mac and its sister home-loan sister Fannie Mae.

These government-backed groups will allow mortgages for first-time home buyers who can come up with down payments as low as 3 percent of the home loan. That lower threshold is scheduled to take effect Dec. 13 at Fannie and March 23 at Freddie.

Tax savings often are cited as one of the advantages of owning your own residence. There are many residential tax breaks. And the latest Weekly Tax Tip looks at ways to maximize two of them -- mortgage interest and property tax payments -- by the end of the year.

Although the deduction may be claimed by any homeowner with a loan of up to $1 million used to buy or refinance a primary residence or secondary home (and in some cases up to $100,000 in a related home equity loan), it actually helps out many fewer homeowners.

The reason is that there's no reason to claim the mortgage interest amount, as well as real estate taxes and other itemized deductions if they don't add up to more than the standard deduction amount.

For the 2014 tax year, the standard deduction is $6,200 for single people and husbands and wives who file separately; $12,400 for jointly filing married couples; and $9,100 for heads of households.

If your itemized expenses don't exceed the standard deduction amount for your filing status, there's no need to mess with Schedule A.

So home-owning taxpayers whose combined itemized deductions are less than the standard deduction do not directly benefit from the mortgage interest deduction or other home-related tax breaks.

Costly for Uncle Sam: The mortgage interest deduction is of particular interest to tax and finance folks. One reason is its cost to the U.S. Treasury. Joint Committee on Taxation analysts found that deductions for mortgage interest alone came to $69.7 billion in lost revenue in 2013.

And most of Uncle Sam's revenue losses were as tax savings for wealthier homeowners.

In its Dec. 4 analysis of the mortgage interest deduction across Zip Codes, the TPC says it is wealthier homeowners who tend to have larger mortgages (and therefore more interest), higher state and local taxes, and larger charitable contributions that they can deduct.

"Not surprisingly, therefore, high-income taxpayers in richer zip codes are more likely to claim the mortgage interest deduction, while taxpayers in low- and middle-income zip codes frequently have relatively low claiming rates," according to the TPC study. 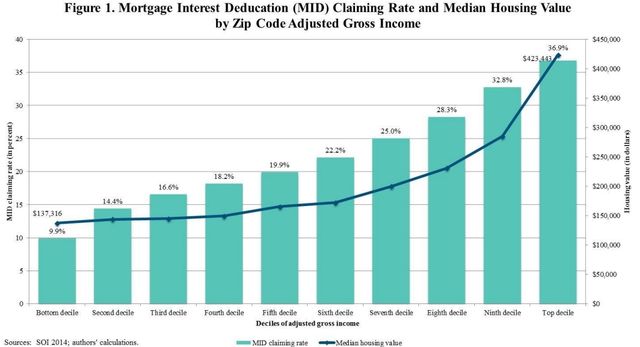 The deductible interest amount obviously is related to AGI, the price of the homes and the associated loan sizes. For those Zip Codes in the lowest income level of TPC's study, the median home value was $137,316. Home value increased steadily until sharply rising from $285,197 to $423,443 from the ninth to tenth income sectors.

The bottom line per the TPC analysis: The mortgage interest deduction is the largest tax expenditure for home ownership, but its value is not distributed equally across the income distribution or localities.

"In particular, we find that roughly half of the aggregate mortgage interest deductions are claimed by twenty percent of zip codes," note study authors Benjamin H. Harris and Lucie Parker.