Taxes account for a large part of cellular phone bills

I was a relative latecomer to smartphones, but once I got one, I was hooked.

I'm not so addicted that I spent days in line to get an iPhone 6 (no 6 Plus for me; I like putting my phone in a pocket, not a purse). But the hubby and I probably will trade in our older versions sometime next year.

The blessing of today's mobile technology is that the phones are much more than just devices on which to call your mom every weekend.

We use them a lot for a lot of different things. That means it's easy for the phone company to slip in added charges.

It also makes it easy for tax collectors to pad their governmental pockets.

Tallying wireless tax costs: Americans pay an average of 17.05 percent in combined federal, state, and local tax and fees on wireless service, according to a new study by the Washington, D.C., tax policy nonprofit Tax Foundation and KSE Partners LLP of Montpelier, Vermont. 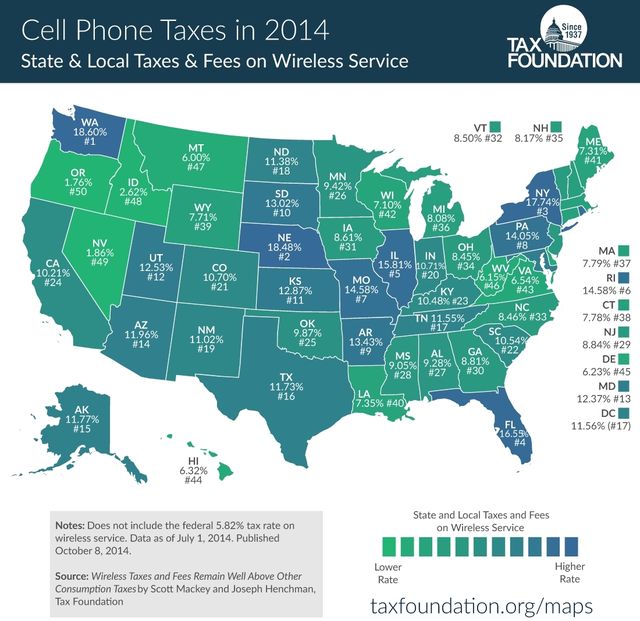 That combined rate comes from a 5.82 percent federal rate and an average 11.23 percent state-local tax rate.

Although wireless fees and taxes have decreased slightly from 2012, dropping to 17.05 in this latest examination from 17.18 percent two years ago, that fractional decrease probably isn't noticed by most customers.

Wireless consumers still face a bigger tax burden when compared to other taxes, according to the Tax Foundation. The think tank says the average rates of taxes and fees on wireless telephone services are more than two times higher than the average sales tax rates assessed on most other taxable goods and services.

Worse in some states: As I discussed last week at my other tax blog, these taxes and fees are major contributors to the high cost of cellular service.

Part of those added charges are from local governments. In 12 states, local officials impose some type of tax or fee on wireless service.

Have you found taxes inching up on your wireless statement? You're not alone.

Tax cheat temptations: A lot of folks use their cell phones for business. Those mobile charges are acceptable deductions. Just make sure you sort through those long wireless bills for the correct charges to claim.

Of course, the frustration of paying more in wireless taxes to one (or more) jurisdiction might just make you feel like pushing the federal deduction envelope a bit.

As I also noted last week at Bankrate Taxes Blog, this temptation also could be caused by fewer IRS audits, which tend to lead to more tax cheats.

Yep, IRS examination of tax returns has been dropping in recent years.

Why? Not enough staff.

A recent Treasury Inspector General for Tax Administration, or TIGTA, report found that after hiring almost 3,300 revenue agents and tax compliance officers in fiscal years 2009 and 2010, the IRS has filled fewer than 200 of these positions over the last three fiscal years.

And with the threat of audit diminishing somewhat, more folks might be tempted to try to slip something past the IRS.

I usually post my additional tax thoughts at Bankrate on Tuesday and Thursday. If you miss those posts on those days, stop by here over the weekend where I usually post highlights and links.