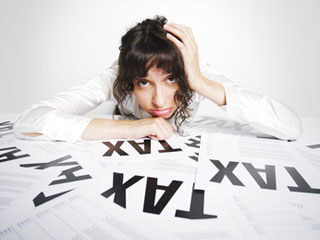 This is why people hate taxes.

OK. There's no one "this" when it comes to tax loathing. But here's one big reason: confusing dates.

Right now we're working on ways to reduce our current year's tax bill. To do that, we must make many tax moves by Dec. 31.

But some of those moves will depend on what our tax situations will be like in the coming year.

So we've got to juggle two tax years simultaneously. That's two too many tax years for most folks.

Still, it's a necessary tax evil. And the latest comparison and evaluation of this year's and next year's taxes officially starts today thanks to the Internal Revenue Service's announcement of inflation adjustments to more than 40 tax provisions.

I'm not going to cram all of them into one blog post. I'm going to take advantage of data dump to spread out the 2015 tax information across several posts.

Today's first look at the many 2015 tax figures is the coming tax brackets.

The seven tax rates, starting at 10 percent and topping out at 39.6 percent, are the same. The amount of ordinary income that falls into each of these seven tax brackets, however, is bumped up a bit.

Note, the rates and income amounts above are for the 2015 tax year. That covers the tax returns you'll file on April 15, 2016. That's right, yet another tax year.

But as mentioned earlier, when it comes to tax planning you need to look at what your tax bracket will be next year and how that compares to what it is this year.

Yes, it's a lot of numbers over several tax years. But spending a little time on them now can help you create a tax strategy to pay Uncle Sam less.

And if you're a total tax geek, check out tax rates and the corresponding income brackets from 2010 through 2015 on the ol' blog's special new Tax Rates, Tax Brackets Through the Years page.