Getting old sucks. We can't stop Father Time, but we can prepare physically, emotionally and financially

I am a firm believer in the cliché adage truth that you're as young as you feel. Age is an artificial construct, devised by humans to set limits.

Personally, I don't celebrate birthdays. I don't hate them, but making a big deal of the day on which you just happened to appear screaming into (at?) the world seems silly.

As a friend from Washington, D.C., (miss you, Maxine!) once said and I repeat often: Age only matters if you're wine or cheese. 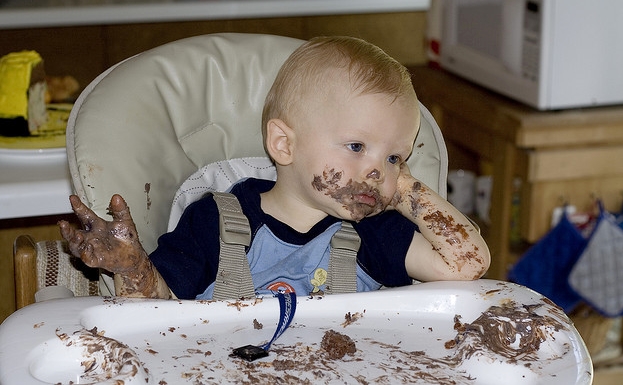 "Is the cake all gone?" Photo by Chris Moewes via Flickr.

Instead, I try to celebrate (with varying degrees of success) every single day, not just one day a year. Cake all the time!

I know that sounds all chipper and optimistic, two attitudes those closest to me don't usually use to describe me.

But with every day's arrival, I don't need a calendar to know that I and the ones I love are a little bit older. So it just makes sense to enjoy and celebrate now instead of waiting for a few days each year.

Age 75 and bust: Aging has been on my mind recently for several reasons. And yes, one of them is tax-related.

First, however, are a couple of articles in national publications that take different looks at getting older.

You might have seen Ezekiel J. Emanuel's recent Atlantic magazine article or subsequent national media coverage it's generated in which he explains why he hopes to die at 75.

Emanuel focuses on the physical toll of getting older:

"It renders many of us, if not disabled, then faltering and declining, a state that may not be worse than death but is nonetheless deprived. It robs us of our creativity and ability to contribute to work, society, the world. It transforms how people experience us, relate to us, and, most important, remember us. We are no longer remembered as vibrant and engaged but as feeble, ineffectual, even pathetic."

Emanuel isn't chronically ill and doesn't have any foreshadowing of his eventual demise. He's just decided how long he wants to live and the kind and amount of health care he will consent to after that age.

He also looks askance at what he calls most Americans' "manic desperation to endlessly extend life," calling it misguided and potentially destructive.

Living life, not just extending it: A few days later, the New York Times published "Too Young to Die, Too Old to Worry."

The opinion piece by Jason Karlawish leads with singer/songwriter Leonard Cohen's decision on his 80th birthday to start smoking cigarettes again. His reasoning: "It's the right age to recommence."

Basically, says Karlawish, as we age we must decide when it's time to stop saving in the various aspects of our lives and spend some of our principal by actually living, not just getting older.

Retirement finances key: Both of these recent ruminations on aging primarily focus on the physical aspects of getting old. For most of us, they aren't pretty.

But there's also the financial component. For some, this isn't a pretty picture either. A lot of people dread getting older because they're afraid they'll outlive their money.

There is, however, some good news here.

The latest U.S. Census report says that people older than 65 are less likely to be poor than people in their prime working years.

The National Bureau of Economic Research concurs. Its data show that elderly poverty in the U.S. decreased dramatically during the twentieth century.

Between 1960 and 1995, the official poverty rate of those age 65 and older fell from 35 percent to 10 percent, and research has documented similarly steep declines dating back to at least 1939. In fact, says NBER, today's elderly have a poverty rate similar to that of working-age adults and much lower than that of children.

How the tax code can help retirement savers: Social Security alone, however, cannot provide for the type of retirement that most of us want. We have to save for our golden years ourselves, via a workplace retirement plan, on our own or, preferably, both.

But too many of us aren't taking advantage of Uncle Sam's assistance.

That's why the Senate Finance Committee held a hearing, which I covered last week at my other tax blog, to examine possible tax code tweaks that would make more of us put away retirement money.

"The American taxpayer delivers $140 billion each year subsidizing retirement accounts, but millions of Americans are nearing retirement with little or nothing saved," said Finance Committee Chairman Ron Wyden (D-Ore.) as he opened the hearing, which I covered last week at my other tax blog.

There clearly is something "out of whack," said Wyden. "Wise investors have every right to use all the tools available to them, and no one should begrudge them their success. But IRAs were never intended to become tax shelters for millionaires. They're designed to help typical Americans save for retirement."

Also over at Bankrate Taxes Blog last week, I looked at how the U.S. stacks up tax-wise against the rest of the world. It's not good. We're 32nd in tax competitiveness.

I usually post my additional tax blog thoughts at Bankrate every Tuesday and Thursday. If you don't get a chance to check them out then and there, I try to post highlights and links here at the ol' blog the following weekend.