I was a novice reporter back in February 1979 when thousands of American farmers converged on Washington, D.C.

That 18-day tractorcade through messy winter weather produced not only global recognition of U.S. farming issues, but also an office for the organizing American Agriculture Movement in the nation's capital.

Since that angry grassroots beginning, AAM has played a part in shaping federal ag legislation.

In addition to general tax policy complaints, they are concerned about falling prices, brought about in part by a Russian embargo on some Western goods in the wake of the Ukraine crisis.

The French farmers, however, took a more aggressive approach in the country's Brittany region, where farming and the food industry are major employers.

The demonstrations escalated last week when around 100 farmers used their tractors to haul and dump unsold produce, mostly artichokes, potatoes and cauliflower, along with manure in the streets of Morlaix.

But they didn't stop there. 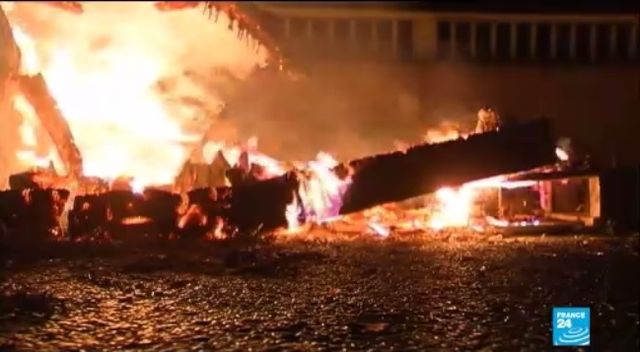 Click image to view France24 video, complete with lead-in ad in français (story is in English).

They set fire to an agricultural insurance office outside the Breton town, as well as burned the local tax office to the ground.

Media reports from the area said that the farmers blocked a main Morlaix road in both directions, preventing firefighters from getting to the blazes.

Not cool, guys. Not cool at all.

Protests are fine. They often are the only way to accomplish worthy goals.

But destruction of property -- even that occupied by the hated tax collector -- not only is criminal everywhere in the world, it also overshadows your message and undermines your credibility.