How does the U.S. corporate tax rate compare to other countries?

Exactly where and how much lower?

You can find out via the Tax Foundation's new interactive map of worldwide corporate income tax rates. 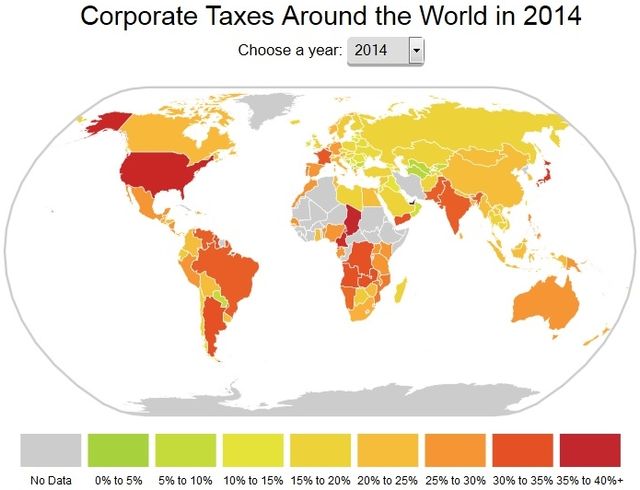 Click on the image above to go to the Tax Foundation's interactive corporate tax map.

Tax comparisons typically tend to focus on how the United States stacks up against other countries in the 34-member Organization for Economic Cooperation and Development (OECD).

Breaking down the numbers: In its report on which the map is based, the Tax Foundation found that the U.S. corporate tax rate of 39.1 percent -- that's the federal tax rate of 35 percent plus the average tax rate among the states -- is the third highest of the 163 surveyed countries.

Topping the tax list is the United Arab Emirates at 55 percent, with Chad in second place at 40 percent.

Overall, the Tax Foundation found that the U.S. tax rate is 16.5 percentage points higher than the worldwide average of 22.6 percent.

By region, Europe has the lowest average corporate tax rate at 18.6 percent. Africa has the highest average tax rate at 29.1 percent. That's not a surprise, says the Tax Foundation, as larger, more industrialized countries tend to have higher corporate income tax rates than developing countries.

Tax rates have declined: And there is good global tax news.

The worldwide average top corporate tax rate has dropped. The current 22.6 percent was 29.5 percent a decade ago.

Even better, every region in the world has seen a decline in its average corporate tax rate in the past 10 years.