Heading into the tropical storm...maybe

Next week I'll be at the final Internal Revenue Service Nationwide Tax Forum of the year.

Guess where it is? Orlando, Florida.

Guess what might hit Florida? A tropical storm system. 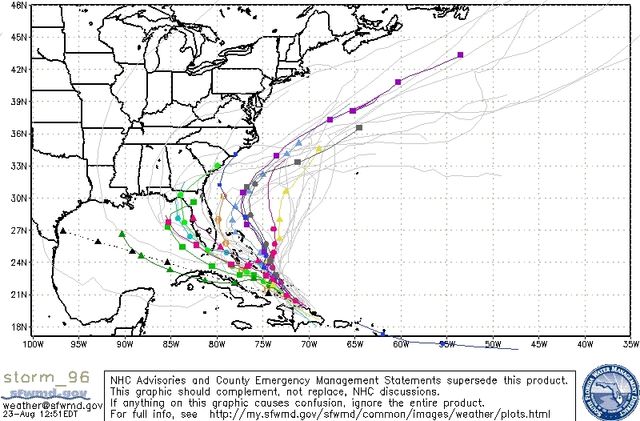 Yep, those are the potential paths (courtesy of South Florida Water Management District) of what right now is known in the weather world as Invest 96L, or Storm 96 for short. If 96 gets its act together, it could become the third named storm of the 2014 Atlantic/Gulf of Mexico hurricane season.

I'm hoping that there won't be a Tropical Storm or Hurricane Cristobal.

Cristobal's coming: However, the latest word from National Weather Service's National Hurricane Center is that data from a hurricane hunter plane that flew into the system this morning found environmental conditions favorable for the development of a tropical depression or tropical storm later today or Sunday.

I myself will be flying into the north central part of the Sunshine State on Monday, so my inbound travel should be OK. Orlando also is inland, so it's pretty insulated from most of a storm's landfall effects.

Still, after going through two hurricanes, Frances and Jeanne, within three weeks back in 2004, I remain a bit leery of tropical storms.

So I'm hoping the hotel has generators just in case.

And I'm beseeching the weather gods to send the system along the more easterly possible paths.

UPDATE, Sunday, Aug. 24: Tropical Storm Cristobal did form, but now all projections have it staying well out in the Atlantic.

Get storm ready now: Others, however, need to do more than wish and hope and worry.

The heart of the Atlantic hurricane season is upon us. That means folks who live in an area that could be a storm target need to prepare.

The ol' blog's special Natural Disasters Resources page can help. Be ready and be safe!

And if Storm 96/Cristobal passes by the Florida peninsula, I'll raise a glass to celebrate while I'm in Orlando.