IRS, betting that expired state and local sales tax deduction will be renewed, hires firm to calculate Schedule A tables

This work week, I'm in Florida, a place the hubby and I lived for six years and one of the seven states without a personal income tax on wages.

I came here from Texas, another no-income tax state.

My current and former neighbors in both jurisdictions are hoping that when Congress finally gets back to work, likely after the November elections, the tax extenders will be near the Capitol Hill to-do list.

These, as most folks and definitely all long-time blog readers know, are the more than 50 business and individual tax breaks that expired at the end of 2013. They are periodically renewed for one to years at a time, often retroactively as will be the case this year if the reauthorizations are approved. 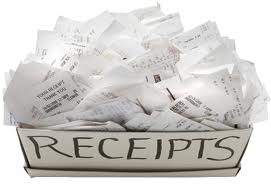 This is particularly important to Texans, Floridians and all the other no-tax state residents. It gives them a chance to deduct the state and local taxes they do pay and, according to sales tax deduction advocates, levels the taxes paid deduction playing field.

Some folks who live in low income tax states also might find it more beneficial to claim their sales taxes instead of income taxes on the Schedule A forms where they itemize their deductions.

Most Congressional observers expect the sales tax deduction, along with most of the other extenders, to eventually be returned to the tax code at least for a limited time. But right now, that's not a certainty.

Even the Internal Revenue Service is getting antsy. John Dalrymple, the IRS deputy commissioner for services and enforcement, said this week that he hopes Congress will pass extenders as soon as possible to give the agency enough time to make the necessary systems changes for the tax filing season.

IRS getting ready, just in case: But instead of just hoping, the IRS is taking some steps to be ready, at least when it comes to the sales tax deduction.

Tax publisher and software company Wolters Kluwer, CCH has announced that for the 10th consecutive year, the IRS has selected the company to provide the data for the comprehensive sales tax rate and taxability tables that filers will use for their 2014 returns ... if Congress renews the tax deduction.

The 2014 tables will be updated versions of the 2013 information, an excerpt shown below, that are found in the Form 1040 Schedule A instructions. 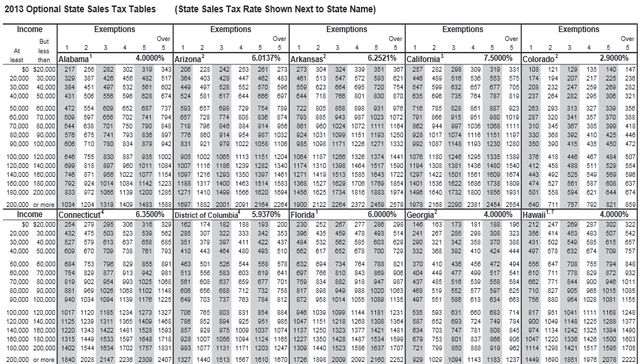 The figures in the tables represent an average of consumer expenditures, based on family size and income, for every ZIP Code in the country. By using the tables, taxpayers don't have to collect and add up all their year's receipts.

In addition, notes Wolters Kluwer, CCH, the company is providing the IRS with data related to the tax rules for more than 500 Bureau of Labor Statistics spending categories.

One year I did hang onto to receipts and totaled them for my tax return. It was very close to the sales tax tables, so I've never done that again.

You also can check out the IRS' online sales tax deduction calculator.

Let your lawmakers know: If you live in one of the no-income or low-income tax states -- which, in case you didn't click the earlier link, are Alaska, Florida, Nevada, South Dakota, Washington, Wyoming and my home state of Texas; New Hampshire and Tennessee don't tax wages, either, but do tax interest and dividend income -- and rely on the sales tax deduction, let your Representative and Senators know.

They might be waiting until after votes are cast on Nov. 4. You, however, can make it clear now that your ballot choices in a few months might be influenced by candidates' positions on this expired tax break.

If they don't agree with you, in addition to shopping for possible sales tax deductions, you'll be shopping around for new members of Congress.