Will the Highway Trust Fund be refilled before it runs dry?

The Senate is expected to vote next week on a bill to refill the funding tank that fuels the nation's highway and mass-transit projects.

The Highway Trust Fund essentially covers all federal highway and bridge projects. U.S. Transportation Department officials have been warning for months that the fund will run dry, possibly as soon as August. 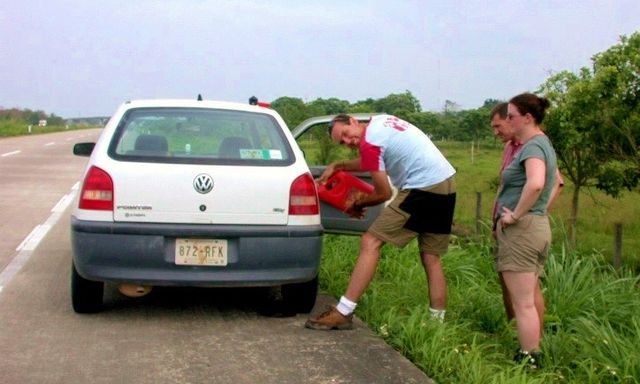 If that happens, warns the White House, 700,000 jobs could be lost and 100,000 active infrastructure projects already underway across the country could slow or stop altogether.

Fearing the worst, which isn't a bad assumption given this Congress, many states that use the funds for repairs and construction within their borders have already put projects on hold.

And while there is bipartisan consensus on Capitol Hill that the Highway Trust Fund must be refilled and soon, there is no agreement on how to do that.

Nonetheless, the Senate is expected to take up the $10.9 billion highway bill that the House passed earlier this month. That proposal would keep the Highway Trust Fund operational through May 2015.

Senate Majority Leader Harry Reid (D-Nev.), however, will allow amendments to be offered to the House bill.

Higher or lower gas taxes: The Highway Trust Fund has traditionally been fueled by the federal gas tax. That levy has been stuck at 18.4 cents per gallon since 1993.

Meanwhile, transportation projects have increased in the last 21 years. Uncle Sam's transportation funding level now is about $50 billion per year. The gas tax brings in around $34 billion annually.

That's why Sens. Chris Murphy (D-Conn.) and Bob Corker (R-Tenn.) introduced a bill that would hike the gas and diesel excise taxes by 6 cents in each of the next two years.

On the other side of the gas tax fight are Sen. Mike Lee (R-Utah) and Rep. Tom Graves (R-Ga.). They want to gradually eliminate federal funding of transportation projects.

Their Transportation Empowerment Act (TEA) would lower the gas tax over five years from 18.4 cents-per-gallon to 3.7 cents. As the federal tax was being phased out, TEA would transfer authority over federal highways and transit programs to states and replace current congressional appropriations with block grants.

"Nearly half the states are already taking steps to become more fiscally independent in how they fund transportation projects," said Lee in discussing the upcoming vote on his measure next week as an amendment to the House transportation bill. "This legislation would make that process easier and empower all 50 states to be more responsive to the needs of their citizens. The states already own and maintain the roads."

Higher gas tax. Lower gas tax. No federal gas tax. Will fights over this issue and other amendments derail the highway funding measure?

One thing's for sure. All the revenue options are sure to spark amendment fireworks when the Senate takes up the highway funding bill.

State gas tax adoption dates: In addition to the federal funds, states also deal with road and infrastructure projects within their borders by using money collected from their own state fuel taxes.

The Tax Foundation has a nifty map that shows when each state adopted its gasoline tax. 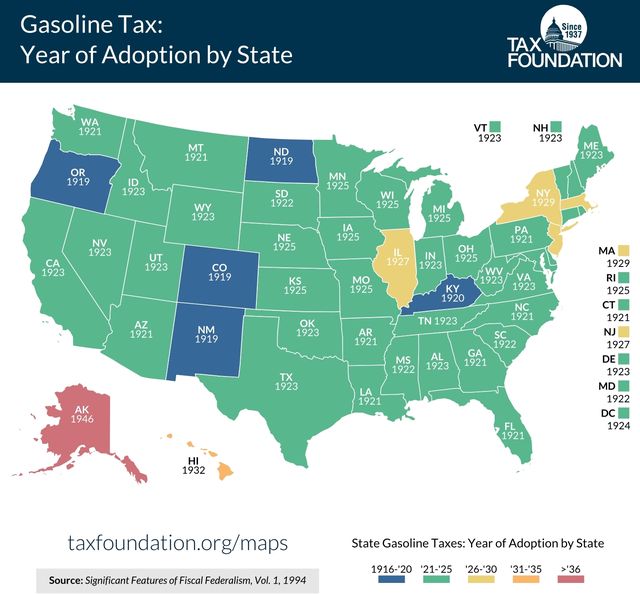 Texas' first oil boom and the birth the modern petroleum industry arrived when the Spindletop gusher was tapped on Jan. 10, 1901. But as the map notes, it took the Lone Star State two decades to tax the gasoline produced from oil.

Most states enacted their gas taxes in the same time period as did Texas, the 1920s.

The last state to adopt a gas tax? Another one that's very oil dependent, Alaska.