Minnesota's jock tax to get boost from MLB All-Star Game

The debate among hardcore sports fans and the occasional and newbies that teams always want to attract is whether what we watch on the field (or arena or track) is a competition or entertainment.

Realistically, it's a combination of both. But team owners, league officials and the media outlets that broadcast the events often see them as spectacles more than sports.

They are correct on days like today. Major League Baseball's annual All-Star Game is tonight at Target Field in Minneapolis, Minnesota. 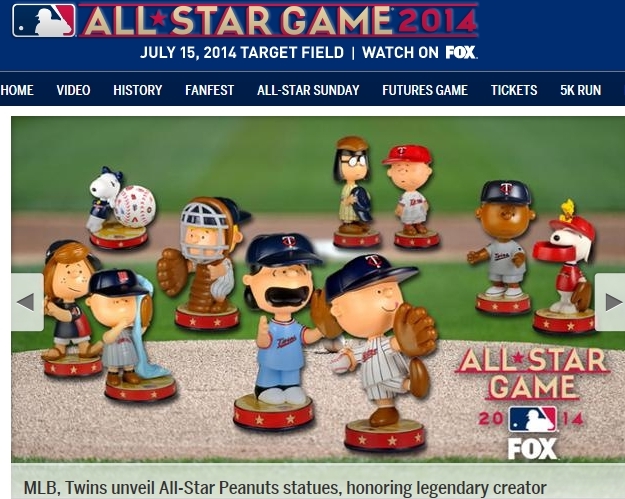 Bobbleheads are ubiquitous at sporting events. But in conjunction with this year's Major League Baseball All-Star Game, the hosting Minneapolis Twins, MLB and Peanuts Worldwide have gone a few steps further down the baseline to honor Charles Schulz, one of the Twin Cities' most famous sons. Ten of Schulz's legendary "Peanuts" comic strip characters have been memorialized as life-sized statues in full Twins uniforms and decorated with full baseball gear. Click the image above to read about how you can own one of the large statues for your own backyard field of dreams or smaller reproductions for your bookshelves. (The link is to a news story, not a paid advertisement.)

Sports, entertainment, all is taxable: Years ago, MLB let Fox Television fiddle with the format, specifically changing the playoff rules so that the league that wins gets to have World Series home field advantage. The idea was that more folks would watch the midsummer break's game if the outcome meant something to the players.

But even though, as Fox likes to say, the game matters, tonight's match-up between the American League and National League all-stars is not a true sporting event. It's pure entertainment.

That's why from a tax standpoint it's fitting that the game is in the Land of 10,000 Lakes. Minnesota's version of the jock tax -- the tax that many states and some cities collect on athletes and others who travel there to perform -- is officially a tax on nonresident entertainers.

"For purposes of this section," notes the Minnesota Department of Revenue Web page on statute section 290.9201, "'entertainer' includes, but is not limited to, a musician, singer, dancer, comedian, thespian, athlete, and public speaker."

Those folks, including the MLB players who are residents of other states but are in town to play in the game, are subject to the state's 2 percent tax on the gross compensation they receive for their performances.

That means the Minnesota treasury will have a nice payday.

There will be over $551 million worth of 2014 salary on the field, according to USA Today's sports/money blog The Fields of Green.