Managing a coffee shop is a fine job that many people would be glad to have. But kudos to Starbucks for acknowledging that not all its employees want to stay with the company for their entire working careers.

Some baristas are working at the popular coffee and tea seller while they complete their studies so they can move on to other fields. And Starbucks is helping them.

Starbucks this week announced that it has partnered with Arizona State University to offer the beverage company's workers a new educational benefit. Starbucks will cover the tuition costs for its workers who take ASU online classes.

Any of Starbucks' 135,000 employees in its 8,000 U.S. stores is eligible for the tuition assistance if they work at least 20 hours a week and have grades good enough to get into ASU.

The Seattle-based company will pay full tuition for those who enter the program as juniors or seniors. Freshmen and sophomores will get partial tuition payment and need-based financial aid.

ASU's tuition generally runs from $3,000 to $10,000 a year depending on the course load and degrees. On a per course basis, the school usually costs about $500 per credit, with 120 credits required to earn a bachelor's degree.

Starbucks estimates that employees who enroll in the program will pay less than half of their tuition.

Tax on education benefits: Some of Starbucks' educationally inclined workers, however, might end up paying some tax on the benefit. 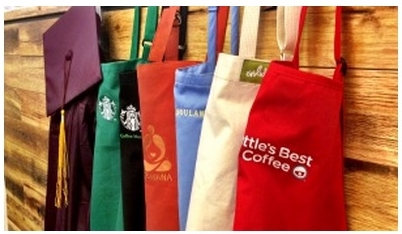 Federal tax law allows employees to receive up to $5,250 a year in tax-free tuition benefits from their employers.

This tax break used to be one of the tax extenders, the temporary tax provisions that Congress must renew every year or so. More than 50 tax breaks expired on at the end of 2013. Any extension will have to wait until after the November elections.

One downside, however, remains. If the benefit exceeds the $5,250 limit, the worker will owe Uncle Sam tax on the extra educational assistance.

A bargain even with a tax bill: Still, given today's college costs, the Starbucks program could be a bargain.

If she's a single filer in the 15 percent tax bracket, which tops out at $36,900 this tax year, she'll owe the Internal Revenue Service $413. Not a bad deal at all for work toward a college degree.

And the company expects that most of its workers who take advantage of the program won't have to worry about taxes. A Starbucks spokesperson told the Chronicle of Higher Education that the "vast majority" of workers won't hit the $5,250 threshold.

Business benefits: Cynics, of course, say that Starbucks is doing this for the public relations value. That's no doubt true.

It's also true that Starbucks can use the tuition program as a recruiting tool, getting workers who might take a job at one of the coffee shops for a lower salary than they might get elsewhere because they want the higher education perk.

There also are real business payoffs.

When workers feel like their employers support them and invest in their self-improvement efforts, employees do better jobs. Better workers mean happier customers, who not only come back on a regular basis for a half-caf low-fat venti whatever, but also tell their friends. That means more sales.

Plus, it's a great retention tool, cutting down on worker training costs.

Although Starbucks isn't requiring workers to stay with the company for any length of time after completing their higher education, some of the newly educated workers just might want to use their ASU skills within the company.

Here in Texas we call that dancing with the one who brung ya.

Fostering such an attitude in the business world is, cynics aside, called being good and smart.