Well, that Congressional hearing provided just about what followers of the Tea Party targeting investigations had expected.

Internal Revenue Service Commissioner John Koskinen just wrapped up an almost four-hour appearance before the House Ways and Means Committee. The tax-writing panel's main focus was a batch of emails belonging to former IRS executive Lois Lerner that were lost when her office computer crashed in 2011. 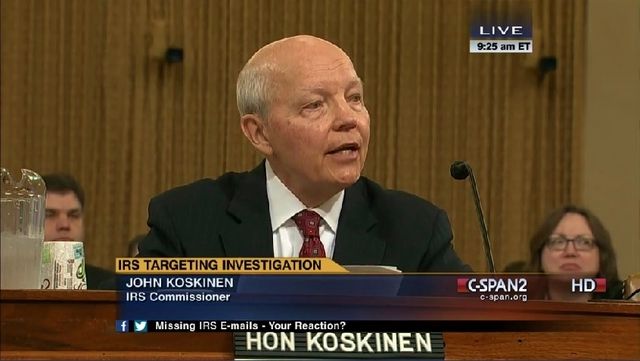 Some of those missing communications are believed to have discussed the division's activities beginning in 2009 in determining which groups were granted the 501(c)(4) tax-exempt status.

At that time of the PC crash, Lerner (who's since left the IRS and is facing contempt of Congress charges) was head of the agency's Exempt Organizations division. Also during that time, her unit was found to have given extra, and inappropriate, attention to groups seeking the favorable tax status based on their names and perceived political leanings.

A Treasury Inspector General for Tax Administration report initially cited conservative and Tea Party groups as being in IRS crosshairs. It later was revealed that progressive and liberal groups also were targets of improper be on look out, or BOLO, screening lists.

The usual suspects on both sides: As tends to happen in today's polarized political atmosphere, both sides dug in during today's hearing.

No amount of testimony or documentation will change them minds of some Republicans who are convinced the groups' tax applications were held up in order to keep them from mobilizing voters against Barack Obama's presidential re-election campaign.

"This is unbelievable," former Republican vice presidential candidate Rep. Paul Ryan (R-Wisc.) told Koskinen. "The apology that ought to be given is to the American taxpayer, not to a government agency that is abusing its power. I am sitting here listening to this testimony, I don't believe it. That's your problem. Nobody believes you."

Some in the GOP also are convinced that the White House was part of a conspiracy to deny conservative groups the tax-exempt status.

Meanwhile, Democrats remain steadfast in their beliefs that the White House is not involved and that the email problems are simply unfortunate technological complications. Their GOP colleagues, Democrats insist, are fanning dying embers to try to ignite political enthusiasm within their party in time for the coming midterm elections.

Rep. Joseph Crowley (D-N.Y.) told Koskinen and his fellow Ways and Means members that he understands the suspicions of the majority Republican Party about the lost emails. "It's similar to suspicions we [Democrats] had in March 2003 to October 2005 when the [President George W.] Bush Administration lost nearly 5 million emails regarding dismissals of U.S. Attorneys."

This time, said Crowley, many of his GOP colleagues are "seeking an Academy Award for best outrage in a fake drama."

Key Koskinen points: Despite the hours in the Longworth hearing room, the IRS commissioner was given limited time to answer questions. That's not unusual in these hearings on both sides of Capitol Hill.

They've essentially devolved into opportunities for Representatives and Senators to make their political points and rack up sound bites to be used in constituent (and fundraising) mailings and campaign advertisements.

But Koskinen did make some points.

He emphasized that since the investigations, which now total six between Congressional committees and the Department of Justice, "not a single email has been lost."

"There will always be a group of people who don't believe the government is up to any good," Koskinen said, but there is no attempt to mislead what happened in the agency's review of tax-exempt applications. "Before these investigations started, there was no reason to destroy a hard drive and the evidence shows that we tried very hard to recover these emails."

Koskinen cited a 2011 exchange between IRS technology staff and Lerner, well before the matter became an issue, in which she sought to have her messages restored. He noted that the hard drive even was sent to the IRS Criminal Investigation division in the hopes that it might be able to retrieve information.

As for the hard drive in question, it looks like Camp won't get his wish of examining it himself. Koskinen said once it was determined back in 2011 that nothing could be recovered, it was destroyed.

Camp and several of his GOP colleagues also were upset that Treasury and the White House apparently knew of the lost emails before they did.

The Ways and Means chairman asked Koskinen to explain why he didn't alert House members in February upon learning of the lost emails. Koskinen said he made the decision to complete the investigation in order to give Congress a full explanation of what happened rather than deliver it piecemeal.

"We do better to have a rational discussion when we have all the facts," said Koskinen. "I'm not going to dribble out the information and have it played out in the press."

Then there was this exchange in which Camp prodded Koskinen to answer yes or no as to whether he would support the appointment of a special prosecutor to look into the missing emails:

Koskinen: "The appointment of special prosecutor after six investigations already ongoing would be a monumental waste of taxpayer money."

And in a "what if" round of inquiry, Rep. Kenny Marchant (R-Texas) wondered if Koskinen knew whether the National Security Agency had been monitoring the IRS during the time Lerner's computer crashed.

Koskinen acknowledged that if the NSA had been spying on the IRS, "then they [the emails] might be there."

However, neither the Texas Republican nor the IRS chief expressed an interest in contacting the NSA about what it might or might not know.

Full hearing, prepared testimony: If you have three or so hours this afternoon, you can check watch C-SPAN2's tape -- part 1 and, after a break for panel members to the House floor for a vote, part 2 -- of the hearing.

The cable network will re-air it tonight at 8 p.m. Eastern/7 p.m. Central. Today's hearing also is available on the Ways and Means' video website.

And clear your DVR for Koskinen's special prime time appearance on Monday, June 23, before the House Oversight and Government Reform Committee. Given how the commissioner's last meeting with that panel, it might go six hours!