It's summer, when most of us take vacations. Most of those trips are by car.

That's why you tend to see gasoline prices go up in the summer. 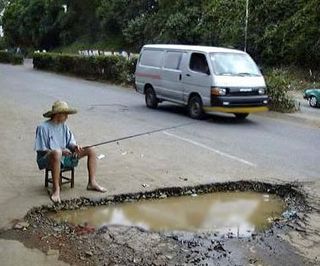 The only consolation in paying more at the pump is that the associated taxes and fees are supposed to help with road-related matters, such as repair and maintenance.

Supposed to, but apparently not doing so in many cases and places.

And folks in two states, Michigan and Massachusetts, are decidedly unhappy with their states' gas taxes.

Michiganders mad about roads, taxes: Michigan drivers, as noted in this week's Weekly Tax Tip, are in the top 10 when it comes to gas taxes.

At number six on the list, Great Lakes State drivers' pay 59.79 cents per gallon in taxes and fees.

The rest of the pump price at Michigan gas stations goes toward such things as an environmental regulation fee for the refined petroleum fund.

Michigan drivers complain, however, that even with all those charges, they have crummy roads. Part of the reason is the state has one of the lowest rates of investment on roads in the nation.

Massachusetts automatic gas tax: Massachusetts didn't make the top ten in the latest look at state gas taxes, but the topic still is big there.

Massachusetts' gas tax is 24 cents per gallon. More on this amount in a minute.

Combine that with the federal tax and the state's 2.5 cents per gallon underground storage tank fee, and the Bay State's total tax of 44.9 cents per gallon comes in at 26th in the latest gas tax rankings. That's almost a nickel less than the national average.

But about that 24 cents per gallon gas tax. It was hiked by three cents last year by Massachusetts lawmakers, the first increase in the tax since 1991.

And it won't be the last tax hike.

The Massachusetts gas tax is now indexed to inflation, meaning it will automatically rise by the same annual percentage as the U.S. Consumer Price Index.

That's not sitting well with some Massachusetts residents and politicians. Republicans hoping to make inroads in the Democratically controlled legislature have latched onto the fight against gas tax indexing.

What's your state's gas tax rate? Every state adds some taxes and other fees to fuel costs. The American Petroleum Institute's latest quarterly survey shows that the state gas tax national average is 20.87 cents per gallon.

Other state taxes and fees add on average 10.58 cents to each gallon of gas.

You're not off the tax hook if you drive a diesel powered vehicle. The average per gallon state excise tax for this fuel is 18.97 cents. Other state taxes and fees are 12 cents per gallon.

Pennsylvania no longer collects any gasoline excise tax. Both gas tax and the companion diesel tax were eliminated by a transportation funding law enacted in 2013.

But the Keystone State does collect 41.8 cents per gallon in other fees. That's enough to rank it fifth on the latest gas tax list.

The situation is similar in New York, which has an 8.05 state gasoline excise tax and collects 41.81 cents per gallon in other taxes and fees. That earned it second place in the latest tax rankings.

Alaska's gas excise is 8 cents per gallon, just fractionally lower than the expensive Empire State. But because Alaska only collects 4.4 cents per gallon in other taxes and fees, its combined federal and state tax of 30.8 cents per gallon makes it the cheapest, tax-wise, place to fill up.

Too bad that the Last Frontier is just a tad too out of the way for most of us to head there to top off our tanks.