If you live in Alaska, Florida, Nevada, South Dakota, Washington, Wyoming or my home state of Texas, you are not happy right now with the U.S. Senate.

These states don't impose a personal income tax on their residents. Two others, New Hampshire and Tennessee, only collect tax on dividends and interest earned by folks who live and file taxes within their borders. 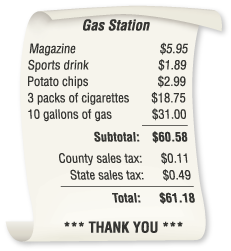 Since 2004, millions of federal tax filers in these no-income-tax jurisdictions have had the ability to deduct the state and local sales taxes that they paid.

Even in states with income taxes, big spenders have found the sales tax write-off a better choice.

But the state and local sales tax deduction option ended with the closure of the 2013 tax year.

And it now looks like, based on the Senate's inability to act on a package of the tax breaks that includes the sales tax write-off, folks who count on this tax deduction likely will have to wait months to see if it is resurrected so they can claim it on their 2014 returns next year.

Adding up per-state deductions: About 11 million filers claimed $17 billion in state and local sales tax deductions in 2011, according to an analysis of IRS statistics by the Pew Charitable Trusts.

Which of those millions of sales tax payers are hurt the most? Pew researchers note that the average deduction and the rate at which it is claimed vary widely across the states.

The table from the Pew report below shows how the numbers shake out in the top 10 sales tax deduction states a few years ago. 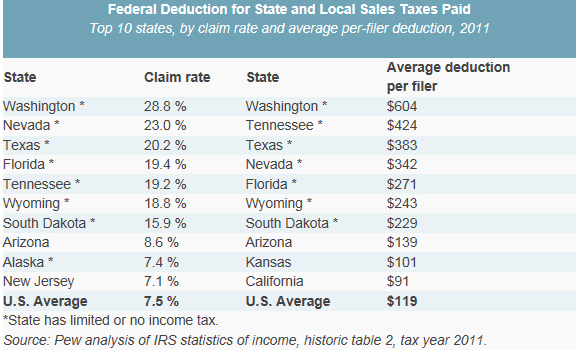 Sales tax deduction history: Once upon a time, taxpayers could deduct both state income and sales taxes on their federal returns. The historic Tax Reform Act of 1986, however, changed that.

It was among several tax breaks that were erased to achieve the greater good of overall tax simplification.

I know, I know. But believe me. The changes 28 years ago did trim the laws substantially. The problem is that it didn't stop Congress from subsequently tinkering with -- and adding back provisions to -- the revised code.

That's what happened with the sales tax deduction. The perceived unfairness of the continued tax deduction for state income taxes continued to rankle folks who lost their tax break. That in turn upset their elected officials.

And in the wake of Bush 41's (W to many of us) tax cut packages, the effort to reinstate the sales tax deduction had gained enough support to see renewed life.

The American Jobs Creation Act of 2004 changed the law to give taxpayers a choice in itemizing state taxes. They could write off their state income taxes or they could claim their state sales taxes.

By doing a little math, taxpayers can see which deduction, state income taxes or sales taxes, will save them more.

The only problem with the return of the sales tax deduction option was that it is temporary. It's one of tax extenders that every year or so expire and must be renewed, aka extended, by Congress for another year or two.

Why the extenders stalled: This year there are more than 50 extenders awaiting action.

The Senate had planned this week to take up -- and, it was generally agreed, would pass -- its comprehensive package of extenders, including the sales tax deduction.

Partisan bickering and the Senate's arcane rules brought consideration of the Expiring Provisions Improvement Reform and Efficiency (EXPIRE) Act -- that's the name of extender measure approved by the Senate Finance Committee -- to an abrupt halt on Thursday, May 15.

Many Republican Senators wanted to tweak some of the provisions. The changes they wanted to make ranged from repeal of an excise tax on medical devices and to addition of a tax holiday for companies that repatriate overseas profits to the prohibition of the Internal Revenue Service from issuing new rules governing political nonprofit groups, the 501(c)(4) groups that have ensnared the agency in controversy for more than a year.

The Democratic leaders of the Senate said no. So the GOP held firm and stopped Majority Leader Harry Reid's (D-Nevada) effort to move the bill forward without an amendment process.

Just one small tax break step: Of course, this week's expected action by the Senate was only one step in the overall extenders renewal process.

The House has only approved a half dozen business related tax breaks that expired. Representatives and Senators must get together on which ones -- odds are good that the bulk of them will be accepted -- will eventually be renewed.

Eventually is the key word. The smart money is on final passage of the extenders not happening until after November's Congressional elections.

But how much later?

In a floor speech before EXPIRE, well, expired for the time being, Sen. Chuck Grassley (R-Iowa), a member of the Senate Finance Committee and former chairman of the upper chamber's tax-writing panel, noted that:

"[L]ate action by Congress results in complications come filing season for taxpayers. Tax forms are not ready and refunds are delayed.

We owe it to our constituents to see to it that these added complications are not a factor this year. Tax season is unpleasant enough without us adding to it by failing to do our job in a timely fashion.

Already, by allowing these tax provisions to expire for more than five months, we have created a lot of headaches and uncertainty for individuals and businesses."

Sorry, Charlie, but judging from the problems the extenders encountered this week, it looks like taxpayers better stock up on aspirin.