Private debt collectors could be coming after taxpayers again

Have you ever owed the Internal Revenue Service money that you just couldn't pay?

What about other overdue bills?

If you're behind on private sector payments, chances are you'll eventually hear from a debt collector.

Now the Senate Finance Committee, via a provision in its tax extenders bill approved on April 3, wants to once again sic private bill collectors on delinquent taxpayers. 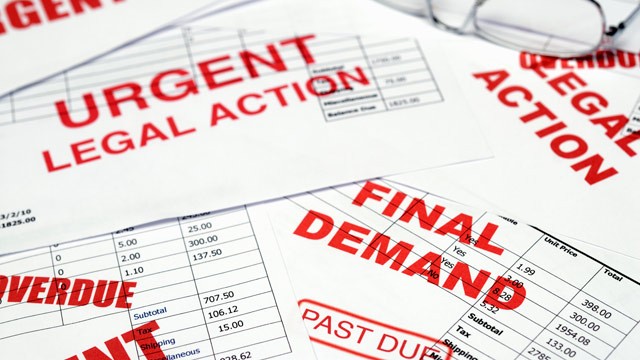 It would require the Internal Revenue Service to use private debt collection firms. The Treasury, boss of the IRS, currently has that collection option when dealing with overdue federal payments, but has chosen not to use it when it comes to taxes.

Required, not optional: Some Senators want to take away Treasury's collection option.

The Senate tax extenders bill would require the use of private bill collectors in some delinquent tax cases. Here's the Finance Committee's summary of the debt collector provision:

The bill's longer report gives reasons for the change:

Costly failure of past private tax collections: The Internal Revenue Service already has tried this experiment.

In two past debt collector efforts, supporters said using private firms would free up IRS employees for other jobs. Plus, argued collection company advocates, the firms were assigned relatively simple debt situations that were easy to collect.

Pardon the repetition, but yeah. Right.

A reboot authorized as part of the American Job Creation Act of 2004 allowed the private debt collectors to keep up to 24 percent of what they recovered as a bounty payment. It turned out such financial rewards again prompted debt collector abuse and harassment of taxpayers.

This second time, the government's net loss was smaller, only around $4.5 million, but the private debt collectors pocketed more than $16 million in commissions.

Official opposition: But the third time's a charm, right? Wrong.

That's the position of the union representing IRS employees.

"Using private companies to collect tax debt has been tried before, resulting in millions of dollars lost to the government," said Colleen M. Kelley, president of the National Treasury Employees Union (NTEU). "It was a bad idea then and it is a bad idea today. Treasury continues to have the authority to use these companies but has chosen not to. Congress should not now force a failed program back into existence. Lawmakers need to respect the lessons learned."

A Taxpayer Advocate Service study found that "the IRS was significantly more effective than [private collection agencies] PCAs in collecting tax liabilities," with IRS agents collecting 62 percent more in back taxes than the agencies.

In fact, said Olson, the study's results probably understated the difference in IRS and PCA effectiveness, since its analysis "placed the IRS at a significant disadvantage." And she called upon Congress to withdraw IRS authority to hire for-profit debt collection agencies.

Off-the-Hill opposition, too: A coalition of consumer and civil rights groups also has voiced concern about the Senate proposal. With the full Senate expected to consider EXPIRE possibly as soon as next week, the groups sent the upper chamber lawmakers a letter arguing against the move.

Requiring private collection of tax debts, according to the letter, would expose taxpayers to potential abuses that are common within the collection industry. This year, as in the past, debt collection agency abuses once again led the Federal Trade Commission and Consumer Financial Protection Bureau lists of complaints by consumers.

"Finally," argues the letter, "the use of private collectors is a waste of taxpayer dollars, lining the pockets of private companies at the expense of the U.S. Treasury."

Money walks and talks: That last argument about the cost to taxpayers rather than for Uncle Sam's coffers might sway some Senators, since the real reason for the change is, as usual, money.

The provision requiring the use of debt collectors was introduced by Sen. Chuck Schumer (D-New York) as a way to pay for the $2 billion cost of an expansion elsewhere in EXPIRE to the business search and development tax credit.

As the bill's summary notes, Senate Finance Committee numbers crunchers believe the debt collection effort could bring in $2.4 billion over the next decade.

The dollar factor also is cited in the Senate report on EXPIRE, which argues for the projected new money to be used for other, IRS in-house tax compliance efforts:

"The Committee believes that the increased collections that may result from the use of private debt collection agencies for limited classes of debts should be used to improve the ability of the Government to handle compliance matters overall. By funding the hiring and training of special compliance personnel, the Committee believes the IRS can establish a cadre of well-trained personnel who perform various compliance functions while protection taxpayers' rights."

First, if I'm ever delinquent on a tax bill, I do not want debt collectors, with whom I've dealt thanks to a relatively minor ID theft issue and for a relative who was freaked out by the calls, having any, even a limited portion, of my or anyone's tax information.

Taxpayer privacy, by federal law, is sacrosanct. It needs to stay that way. Given how too many collection agencies abuse the private sector data they have, the possibilities of abuse with tax data are beyond disturbing.

You know that unscrupulous collectors will leverage the fear that the tax collector already puts in people and use and abuse that emotion to the max.

And, second, even the Senators who signed off on the bill are a tad tentative about the financial prospects.

Notice the use of "may" in the report's discussion above of the money involved. The "increased collections that may result" from the change, not "will" result.

So there's a chance that when the EXPIRE Act comes to the Senate floor, the debt collectors component could be pulled. Or if not then, in conference when the House gets around to dealing with the bulk of tax extenders rather than a just handful of business tax breaks.

And the last thing the embattled IRS needs in its efforts to rehabilitate its reputation and revive taxpayer confidence in its ability is association (again) with the debt collection industry.