The Ways and Means Committee is continuing its piecemeal approach to the 55 expired tax breaks known as the extenders. 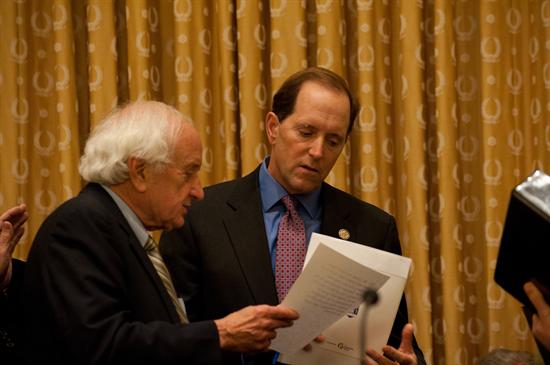 Today (May 29) the House tax-writing panel approved a half dozen tax bills, including a couple that will make taxpayers who count on charitable donation deductions happy.

Five of the proposals deal with charitable donations. The sixth is a popular business deduction.

IRA RMD charitable rollover: Let's start with a philanthropic proposal that's been in place since the 2006 tax year. Under its provisions, individuals who are at least 70½ have been able to directly transfer up to $100,000 of their annual IRA required minimum distribution, known as an RMD, to a qualified charity.

This allows the IRA owners to meet the RMD rules, which carry a stiff penalty if ignored, and not face any tax liability on the withdrawn money because instead of going to the account holder it goes instead to charity.

The IRA RMD charitable rollover has been popular among older IRA owners who don't need the annual withdrawal amounts to live on and the charities that have benefited from the transfers.

But it is a temporary part of the tax code, expiring every year or so, that must be renewed by Congress. H.R. 4619, approved today by Ways and Means members, would make the RMD transfer to charity option permanent.

The Ways and Means approval is welcome because if the measure is soon put back into the tax code, it will give IRA owners facing RMDs this year several months to take advantage of the charitable transfer option.

April 15 deadline for donations: Also approved today was a new charitable giving bill. H.R. 3134, the Charitable Giving Extension Act, would give donors some additional flexibility in deciding when to deduct a charitable gift.

Under current tax law, a charitable deduction generally is claimed on the tax return for the calendar year in which the contribution is made.

This proposal would let donors deduct contributions made by April 15 of the following year -- that's the usual due date for the prior year's tax return -- on that previous year's return.

Conservation, food and foundations: Ways and Means OK'ed three other bills today on the philanthropic front.

H.R. 4719 would permanently extend and expand the charitable deduction for companies that make contributions of food inventory.

H.R. 2807 would continue in perpetuity the favorable tax treatment for landowners who conserve part of their land via easements to qualified to organizations that use it for "significant public benefit," e.g., a park or historic site.

Both the conservation easement and food donation bills are tax extenders that expired at the end of 2013. The fifth charity-related bill that passed the tax panel is, like the Charitable Giving Extension Act, is a new tax law.

H.R. 4691 would give private foundations relief from the 2 percent excise tax assessed if they don't make a minimum amount of qualifying distributions each year. Under this bill, that tax would be cut in half.

Bonus depreciation would be back: A popular business tax break that expired last year also made it through the committee today.

H.R. 4718 would make permanent the bonus depreciation provision that allows companies to add an extra 50 percent on top of normal write-offs for certain capital investments.

Contentious costs: As is usually the case with extenders legislation, none of these bills offered offsetting ways to get money to pay for the tax breaks.

The bonus depreciation for businesses will cost, according to Joint Committee on Taxation calculations, the U.S. Treasury more than $287 billion through 2014.

Overall, all six tax measures approved today will come to, over the next decade, almost $304 billion.

Democratic opposition: All six bills cleared the Ways and Means, but with only Republican committee member votes. Democrats on the panel objected not only to the deficit costs, but also the permanence of the laws and the way in which this group was considered.

"The Majority has cloaked the extension of bonus depreciation within a package of important tax incentives that support charities and the good work they do in our communities," said Rep. Sander Levin, D-Mich., in his opening statement before today's markup. "Indeed, I co-authored alongside Congressman Gerlach the bill to extend the deduction for food inventory donations."

"But we are not here today basically to debate the good works of charities, or nutrition programs or conservation across this country," continued Levin. "There is agreement about their significance, but it is a mistake to approach them in a way that makes provisions permanent without consideration of their place in a broader framework and with reckless disregard for their cost and their impact on other provisions, especially at a time of immense pressures on non-defense discretionary programs."

Ways and Means Democrats also contend that today's markup was a waste of time since the Senate Finance Committee has signed off on a short-term extension of most extenders. That bill, S. 2260 or the Expiring Provisions Improvement Reform and Efficiency (EXPIRE) Act, is awaiting full Senate action as soon as a deal can be reached about possible Republican amendments to it.

The different House and Senate approaches mean that passing any extenders this year -- probably after the November midterm elections -- will be more difficult.

But lawmakers on both sides of Capitol Hill are at least taking some tenuous steps to get the job done eventually.