Tonight could be the end of the 2014 season for the Los Angeles Clippers. They face the Golden State Warriors in game seven of their series to determine which team will go to the next round of the NBA playoffs. 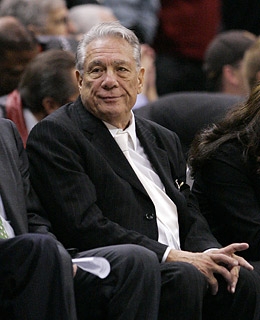 Sterling is expected to fight to keep the team. Part of the reason obviously is pride. But the main reason is money, specifically capital gains taxes.

The disposition of the team makes a big difference to Sterling. It makes a bigger one to his heirs.

Capital gains on sale profit: If he's forced to sell, Sterling will owe capital gains tax on his profit. The current long-term rate for folks in his tax bracket is 23.8 percent, 20 percent for long-term gains and the 3.8 percent net investment income tax.

Sterling bought the professional basketball team in 1981 for $12.5 million. If he sells is forced to sell it for $1 billion, he'd pocket profit of $987.5 million.

That would mean a $235 million tax bill. And that's just at the federal level.

If, however, Sterling's heirs got the team as part of his estate after he dies -- he is 80 years old and reportedly battling prostate cancer -- they would be able to sell the Clippers and face little or no tax bill.

To determine the amount on which you'll owe tax, you start with your basis. This is the purchase price and any other adjustments to value. You then subtract the basis from the sale proceeds. The result is your taxable net.

When an asset appreciates, you get a nice price for your property and Uncle Sam gets a chunk of your taxable profit.

But in the case of inherited property, the new owners' basis is the value of the property at the time of the original owner's death.

Many believe that the going price for the Clippers is $1 billion. That value, rather than the $12.5 million Sterling paid for the team, is the Clippers' basis for Sterling's heirs. With that stepped-up basis amount, they could sell the NBA team for that price and not owe any tax.

Unfortunately for them, that's not likely to happen. Eventually, the NBA is expected to prevail and force Sterling to sell the Clippers and pay the capital gains tax.