You can pick on Cleveland and its sports teams all you want, but you've got to hand it to Browns, Cavaliers and Indians fans. 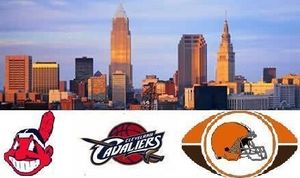 They are willing to pay more sin taxes so that their NFL, NBA and MLB teams can play in top-notch facilities.

Additional levies on alcohol and cigarettes were approved by Cuyahoga County voters on Tuesday, May 6. The taxes are projected to raise as much as $350 million, which will be used to pay for building, renovating, improving or repairing the city's professional teams' facilities.

Tax dollars for the rich: Currently, the Cleveland Browns play their football games at First Energy Stadium. The Cavaliers' basketball games are at Quicken Loans Arena. The Indians play baseball at Progressive Field.

And the venues' sponsoring companies were part of why some objected to the sin tax extension.

The sin tax was first enacted in 1990 and already has raised almost $1 billion in taxpayer dollars for Cleveland athletic facilities. It's been, argued the Coalition Against the Sin Tax (CAST), "practically a bottomless pit of public funding for these hugely profitable private businesses."

But for the third time in 25 years, fandom -- along with politicians at every level of city and county government -- won out over fiscal concerns.

Unofficial results from the Cuyahoga County Board of Elections show that the sin tax extension for another two decades passed with 56 percent of the vote, 101,717 for it to 78,741 against it.

Teams' tax payment lists: The teams already are planning on how to spend the sin tax dollars.

The Browns agreed last fall to finance a $120 million renovation of FirstEnergy Stadium that is expected to be completed in two years. Cleveland agreed to pay the team $2 million interest free over the next 15 years to cover their capital repair obligations under the terms of the lease that runs through 2029.

Indians officials estimate they'll need around $60-to-70 million in taxpayer help to cover capital repairs that their field will need between now and 2023.

The Cavaliers say their arena needs an estimated $55-to-65 million in capital repairs and replacements through 2023.

Team departure spurs tax extension: The first Cuyahoga County sin tax squeaked by voters in 1990. The 15-year tax was created to help pay for construction of the football field and basketball arena, along with two parking garages that opened in 1994.

The first extension of the sin tax came in 1995, one day after Art Modell announced that he was moving the Browns to Baltimore.

In that election, more than 70 percent of voters approved a 10-year continuation of the tax. That money helped pay for the construction of FirstEnergy Stadium, just in time for the return to Cleveland in 1999 of the new version of the NFL's Browns.

Fans' love is priceless...for a while: I get it. We lived in Greenbelt, Maryland, in 1984 when the traitorous Robert Irsay spirited the Baltimore Colts out of town in the dead of a snowy late-March night.

Although we've remained crazy life-long Dallas Cowboys fans regardless of where we've lived, during our time as Marylanders the hubby and I adopted the Colts as our AFC team and attended several games at Memorial Stadium.

So we took it personally when the team was stolen away. And we voted to use some of our Maryland tax money to build a new football stadium to get another team. Go Ravens!

We did so knowing full well that public funding of professional sports teams is not wise. Aside from the fact that it's free money for, as CAST pointed out, incredibly rich team owners and the successful big corporations with whom they align, it's just bad tax policy.

Public money should be spent on public services for all of a jurisdiction's residents, especially those who cannot otherwise afford them.

We sports fans, however, nuts. And there's a lot to be said for the intangible of having a big league team, especially one that wins championships, in your city and state.

But take note teams. In the painful immediate wake of the Browns move, support for the Cleveland sin tax was 70 percent. This time it was supported by just over half of the electorate.

If teams don't win, fans and tax-approving voters are likely to change their minds when it comes to both shelling out for tickets and handing over more of their tax dollars.