The Internal Revenue Service's policy that allows it to award bonuses to employees who haven't paid their taxes is wrong. So is rewarding employees who faced disciplinary action.

That, however, is what happened.

A Treasury Inspector General for Tax Administration (TIGTA) audit found that the IRS paid $2.8 million in bonuses to employees with recent disciplinary problems. Just more than $1 million of those rewards went to workers who owed back taxes.

In addition to cash rewards, the employees in question also received additional time off from work as bonuses.

Source: Awards data from the IRS Human Capital Office and Office of Chief Counsel matched against the ALERTS database and Chief Counsel records.
*The “Total” row does not equal the sum of each column because some cases had multiple issues from these categories. For example, if a case had both a tax and a travel card issue, then it would be counted in both categories in the breakdown but only once in the "Total" row.
TIGTA Redaction Legend: ****1**** = Tax Return/Return Information

The payouts were part of almost $178 million in cash bonuses and more than 1 million in compensatory hours that the IRS issued its workers across two fiscal years.

"These awards are designed to recognize and reward IRS employees for a job well done, and that is appropriate, because the IRS should encourage good performance," said Inspector General J. Russell George.

And the questionable bonuses also went to a very small portion of IRS employees. But…

No rule against such rewards: While the bonuses might have been ill-advised given all the scrutiny that the IRS has been under in recent months, the federal tax agency didn't break any rules.

True, the IRS Restructuring and Reform Act of 1998 does require the termination of IRS employees in situations where they "willfully committed" certain acts of misconduct, including intentional failure to pay their federal taxes. But there is no specific mention in the law as to how that relates to or should affect employee awards or bonuses.

In addition, under the IRS agreement with the National Treasury Employees Union (NTEU) that covers most agency rank-and-file, situations that involve a substantiated disciplinary case, such as nonpayment, late filing or willful understatement of federal taxes, generally is not considered when issuing awards.

Allowed, but appearances matter: The kludgy title of the TIGTA report -- "The Awards Program Complied With Federal Regulations, but Some Employees With Tax and Conduct Issues Received Awards" -- also admits that there wasn't any wrongdoing on the IRS' part.

Still, it doesn't take a rocket scientist or federal inspector or members of Congress who already have the IRS in their sights for Tea Party tax-exempt status targeting to know that there is going to be major blow-back for the tax agency bonuses. As the TIGTA report notes:

"Thus, while not specifically prohibited, providing awards to employees with conduct issues, especially those who fail to pay Federal taxes, appears to create a conflict with the IRS's charge of ensuring the integrity of the system of tax administration."

What will Issa and the IRS do? House Oversight and Government Reform Committee Chairman Rep. Darrell Issa (R-Calif.) obviously is not happy about the bonuses.

"In the private sector, you don't get bonuses, pay increases and promotions right after you've done something wrong and that's what's really wrong with the culture there," Issa told CBS News. "At a minimum, people should have a timeout from bonuses and promotions after being found doing something wrong. That should be inherently part of the punishment." 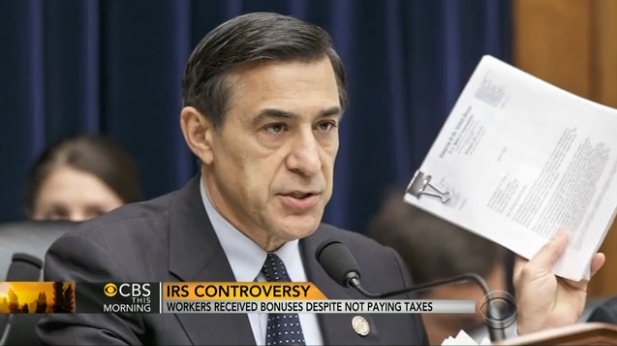 Issa hasn't called for a hearing yet. But keep your calendars clear, Congress watchers.

IRS Commissioner John Koskinen already dealt with committee questions on bonuses during his first appearance in February before the house panel. I suspect Oversight Committee staff is already working out the details for the next inquiry.

Meanwhile, the IRS has already acknowledged its PR if not legal misstep. In response to the TIGTA review, IRS officials say they are working on measures to ensure such rewards won't happen again.

David A. Krieg, IRS Human Capital Officer, wrote in a memo included in the TIGTA report that:

"The IRS is currently developing a policy linking conduct to performance awards for executives and senior level employees. This policy will be issued early in Calendar Year 2014. We would like to note that, even without a formal policy in place, over the past four years the IRS has not issued awards to any executives that were subject to a disciplinary action. If feasible, a policy for the entire IRS workforce will be considered, which would be subject to negotiations with the National Treasury Employees Union with respect to bargaining unit employees."

Will that be enough to satisfy Capitol Hill? From a policy standpoint, possibly.

But from a politically perspective, expect to hear a lot more about this from the anti-IRS crowd on Capitol Hill.