The reinstatement of the extenders, those 50 or so tax laws that regularly expire ad must be renewed by Congress, is continuing on its fits-and-starts way.

A couple of weeks ago, new Senate Finance Chairman Sen. Ron Wyden (D-Oregon) and his panel approved most of the tax provisions that expired on Dec. 31, 2013, for another two years, through 2015.

This morning, House Ways and Means Chairman Dave Camp (R-Michigan) is leading a mark-up of bills that would permanently put six corporate extenders into the Internal Revenue Code. The tax breaks are:

The issue that has the broadest appeal is the research credit. House Majority Leader Eric Cantor (R-Virginia) already has alerted his fellow representatives that they will get a chance to vote on a permanent research credit bill in May.

Extenders aren't tax cuts: Most of the GOP and business communities are gung-ho about these proposals.

But questions are being raised about Camp's decision to push them through without finding money elsewhere to pay for the tax breaks' costs. That's typically been the Republican modus operandi when it comes to tax cuts in other areas, particularly those supported by the Democrats.

To bolster his case for passing these six corporate tax breaks without accompanying fiscal offsets, Camp posted on the Ways and Means majority website an argument from the conservative Heritage Foundation supporting his plan.

"If Congress is to use the extenders constructively to advance sound policy, it must first not fall into the trap of trying to pay for extending the extenders to offset their cost, a mistake that routinely plagues this issue and bogs Congress down from making meaningful improvements," writes Heritage's Curtis Dubay.

Dubay argues that the Congressional Budget Office's (CBO) revenue baseline is false because it assumes that Congress intends to allow expiring tax-reducing provisions, such as the tax extenders, to expire permanently. Since that hasn't happened in recent memory, Dubay says the CBO "wrongfully assumes that expiring tax provisions raise revenue" and therefore "also wrongfully considers Congress’s restoring those policies to be a tax cut."

They are not tax cuts, says Dubay. So no replacement revenue is needed.

Dems want to pay for tax breaks: Heritage's semantic and tax policy hair-splitting notwithstanding, Camp's proposal is getting some push back from House Democrats and progressive groups.

Chuck Marr, writing in the Off the Charts blog for the Center on Budget and Policy Priorities (CBPP), also calls Camp's approach misguided.

Among Marr's complaints is that the consideration of these corporate tax breaks is a double standard.

"By not paying for the costs of making these provisions permanent, the proposal contrasts sharply with congressional demands to pay for other budget priorities," he writes. Marr points to the bipartisan budget deal reached in December that partly and temporarily eased sequestration cuts that were damaging programs and services on the condition that Congress fully offset the costs. 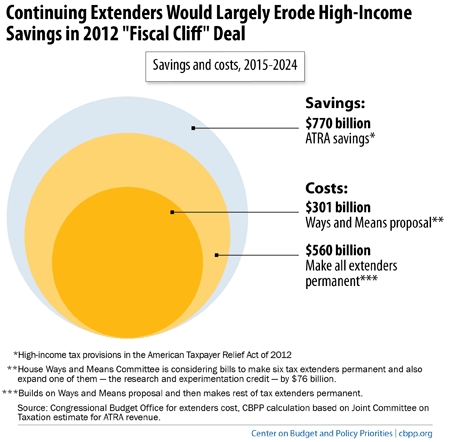 "In addition, House and Senate members have reached bipartisan agreement on a proposal to make permanent relief from severe cuts in Medicare payments to doctors, also conditioned on fully offsetting the costs (although they have not yet agreed on how to do that)," writes Marr, CBPP's director of federal tax policy.

What's next? Look for Camp and his party's majority to succeed in getting the six corporate tax breaks through today's mark-up without any other programs taking a hit. They'll also probably prevail in a full House vote.

But the big question then becomes what will the Senate do? Will the House's jockeying for some unpaid for tax breaks endanger the rest of the extenders?

At risk on the individual side are the sales tax itemized deduction, the ability of some senior citizens to roll over required IRA distributions to charities and the above-the-line tax deductions for school teachers and students paying tuition and fees?

At the least, the dueling approaches to tax extenders in the two legislative chambers is likely to push any action closer to the end of the year.

And that means tax-planning complications for us all.