Tax code still ginormous, but growth has slowed a bit

Last week was a good one for tax wonks. Thanks to House Ways and Means Chairman Dave Camp, tax reform was a hot topic again.

Since Camp, a Republican who represents Michigan's 4th congressional district, took over Ways and Means in 2011, he has focused on reforming the tax code.

A look at this CCH graphic on the number of pages in the Standard Federal Tax Reporter, the tax software and publishing company's key reference book, makes it abundantly clear why Camp and so many others want to overhaul the Internal Revenue Code.

It is huge. Massive. Ginormous. Out of control. Get your thesaurus out and pick your own adjective. 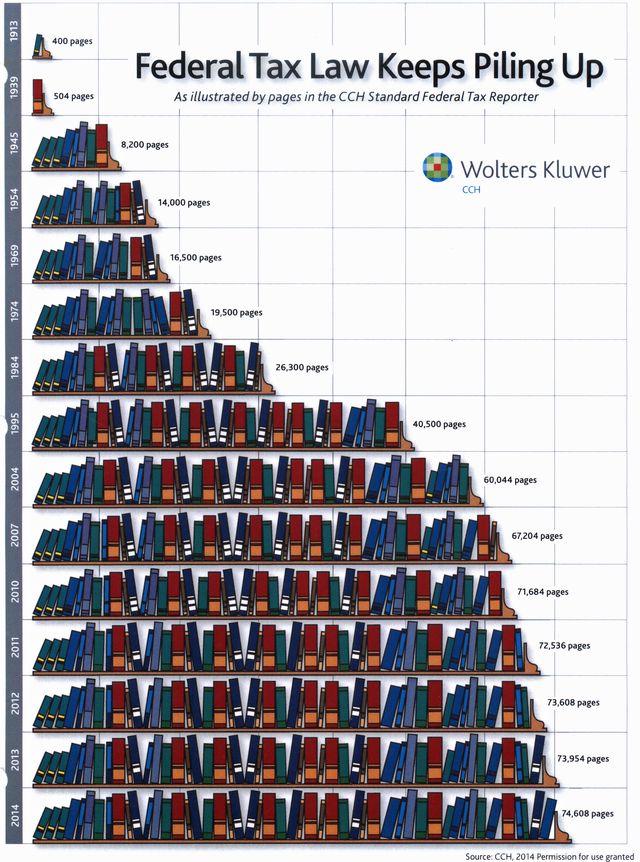 In 1913 when the income tax system that we still use was born, the Standard Federal Reporter only needed 400 pages to list the tax laws, rulings and guidance and explain them.

In 2014 it takes 74,608 pages to interpret and explain our tax system. And that, my friends, definitely deserves this week's By the Numbers honors.

Not so fast: The only positive in CCH's annual graphic is that the pace of added pages has slowed a bit in recent years.

There was a bump in 2014, with 654 new pages. Many of these probably deal with the implementation of new Affordable Care Act tax laws with which higher income taxpayers and their advisers must contend.

So it's no surprise that so many folks want to take a pair of scissors to the tax code. We'll see if Camp's ideas can clip at least a few pages.