The Internal Revenue Service and state tax offices have for years accepted digital documentation when it comes to tax claims.

Now a Philadelphia man's selfies are getting attention as yet another way to make a tax-saving point.

Architect Andrew Jarvis calls Philadelphia home, but spends time in both his firm's New York City and Philly offices. After commuting between the two cities one too many times, he decided to rent an apartment in the Big Apple for those visits when meetings ran late.

Then he learned of New York City's tax residency rules.

If the New York State Department of Revenue and/or New York City tax officials determine a person spends enough time within their borders to be classified as a statutory resident, that individual could face the Empire State's and Big Apple's substantial tax rates on the money earned while physically in the state/city.

If you live in New York City, the tax collector there gets an additional bite of your income. The top city tax rate is 3.876 percent on earnings of more than $500,000.

These rates apply when a person spends more than 183 days in the state.

Tax travel timing: Jarvis obviously would prefer to pay the lower Pennsylvania/Philadelphia taxes, so he started taking date-stamped photos of himself in front of his Keystone State home to prove he spent most of his time there. 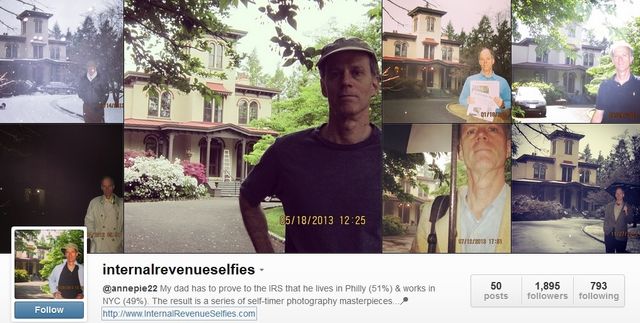 Jarvis' daughter Anne found her dad's tax-related selfies and created an Instagram page for the collection. Despite the Instagram account title and notation (as well as headlines by most media outlets), the key issue here is the New York vs. Pennsylvania tax residency. There could be, however, some federal Internal Revenue Service residency tax considerations, discussed later.

Generally, you are a considered a resident of a state if it is where your main home is located for the entire tax year. Basically, it's the state where you intend to live when you return from a vacation, business trip or school.

But residency rules vary by state. And Jarvis is not the first person to worry about tenacious New York state and city tax collectors.

New York and New York City successfully dunned lifestyle diva Martha Stewart for $200,000 in taxes she neglected to pay because she claimed she was a Connecticut resident.

Those run-ins were before selfie was the word of the year and a new-found potential defense in a tax audit.

Jarvis' photos, many of which show Jarvis holding the day's paper(s) as supplementary proof of the date stamps, have become an Internet hit.

But will they work if Jarvis is audited?

Proving your tax claims: Jarvis is correct that documentation is critical to win arguments with tax collectors.

Today's Daily Tax Tip is a reminder of the need to substantiate all your tax claims. It's also a reminder that when it comes to questions from the tax collector, the burden of proof as to the validity of your claim is on you.

If you're audited, you are assumed guilty of breaking tax law until you prove your tax innocence, i.e., that you can legally claim what's shown on your return.

To adequately and convincingly explain your tax stance, you must keep good records.

And the rules apply to both individual and business tax claims.

Why Uncle Sam cares where you live: While New York and its largest, most-famous city have the most vested interest in Jarvis' business trips into their jurisdictions, tax residency matters at the federal level, too.

The most common issue where residency is a factor is in connection with taxpayers from other countries. Members of the military and their families also have some special residency considerations.

And if you are a U.S. citizen living abroad, you still have dealings with the IRS thanks to our worldwide tax system.

For most of us, however, residency is a federal tax consideration when it comes to, well, our residences.

Homeowners get a major tax breaks, including when they sell their primary homes. Home sale profit of up to $250,000 for single homeowners or $500,000 for a jointly filing married couple is tax-free.

To be eligible for this tax-free cash, you must have lived in the home for at least two out of the previous five years.

The two years don't have to be consecutive. But you do need to show, if asked by the IRS, that you did spend at least 24 months in the home as your main living space during those five years.

Utility bills, driver's license data and yes, photos (including selfies at your house), are a good way to show that your home was, for sales profit tax-exclusion purposes, your primary residence.

This is an impressive and informative article. well It is very new to me that "selfies" can be used used as tax claim documentation, audit defense. Well, Ill share this to my friend who is working in a Sales Tax Audit Defense Company.