There's no IRSCI television show yet, but the Treasury's criminal investigation division is definitely getting more attention for the enforcement numbers it's been racking up of late.

The numbers breakdown is 5,314 cases investigated with recommendations that 4,364 cases be prosecuted. The 2013 conviction rate was 93 percent, an increase of more than 25 percent compared to the prior fiscal year.

Those results are more notable, says the IRS, because during that time frame its agent resources were cut by more than 5 percent.

The Transactional Records Access Clearinghouse (TRAC), a data collection and research organization at Syracuse University, looked at tax-related criminal prosecutions from 2001 through 2013. It found that the number of cases referred by the IRS to the Justice Department for adjudication has skyrocketed under the Obama administration. 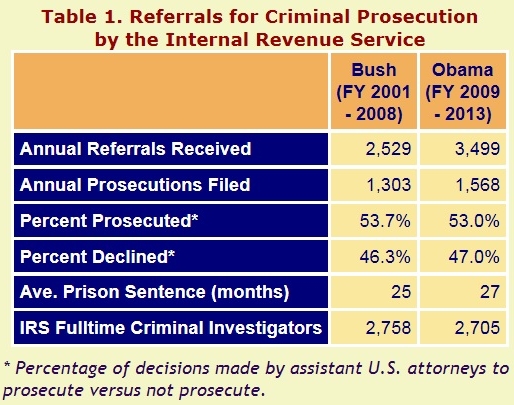 The average number of cases referred each year by the IRS to prosecutors has risen by 38.4 percent during the Obama administration when compared with the Bush years, according to TRAC.

The number of these cases that get prosecuted by the government also rose, by 20.3 percent.

CI initiated more than 1,400 ID theft investigations in FY13, according to the IRS. Its agents recommended prosecution of more than 1,250 individuals accused of being involved in identity theft crimes during that period.

Most notably, the Tampa Bay Identity Theft Alliance was recognized as the "2013 Task Force of the Year," a national award given by the International Association of Financial Crimes Investigators for investigative excellence and outstanding public service. The Florida-based group of crime fighters received national attention when they revealed that Tampa criminals found it more lucrative, and safer, to run tax cons than drugs.

"Individuals who commit identity theft demonstrate a blatant disregard of the integrity of the United States tax system and cause immeasurable hardship to innocent victims," said Richard Weber, Chief of Criminal Investigation, in a statement issued in conjunction with CI's annual report.

Crime-fighting efforts continuing: There's no shortage of work for CI agents. The crooks who perpetrate the tax scams on the IRS' annual Dirty Dozen list keep IRS and other law enforcement agents on their toes.

For the second consecutive year, identity theft topped the 2014 tax scam list. Two of the key ways that crooks commit tax-related identity theft, telephone scams and phishing, were second and third, respectively on the list.

Don't think it can't happen to you.

Halah Touryalai, a reporter with Forbes, recounts How An IRS Telephone Scam Nearly Duped Me Out Of $5,000.

You think you are calm, cool and collected until some well-prepared crook appears with a scheme to get your money by invoking the dreaded IRS. Just take a breath.

If you know or think you owe taxes, go straight to the source yourself. Call the IRS at 800-829-1040 and report the scam. Then work with real IRS employees to resolve any tax issue you might have.