What did we learn during IRS Commissioner John Koskinen's appearance today before the House Oversight and Government Reform Committee?

Koskinen was making his first visit before the Oversight panel to discuss how the Internal Revenue Service previously handled and is now dealing with applications for 501(c)(4) nonprofit status. 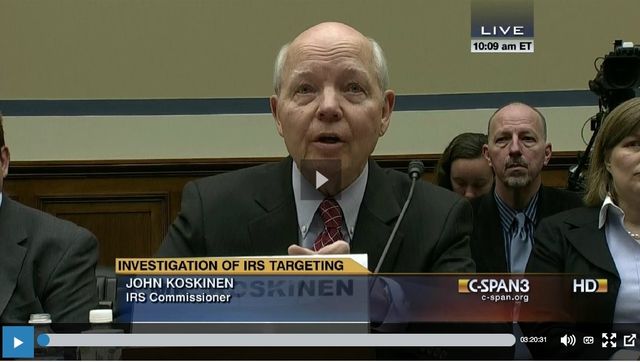 Just in case you have 3½ hours and want to watch the fireworks yourself.

The new IRS chief was treated the same way as most other witnesses on this topic have been. He was asked long, politically-tinged questions and then, for the most part, was not allowed to answer them.

Maybe the Oversight panel should just prop up some cardboard cutouts of future IRS witnesses.

Those members who are predisposed to blast the witnesses and the tax agency -- Chairman Rep. Darrell Issa (R-Calif.) and his GOP colleagues -- could put on the same political show by getting indignant at the stand-in's refusal to answer their questions the way they want.

The minority members -- Ranking Member Rep. Elijah Cummings (D-Md.) and his Democratic colleagues -- could make their points about the excesses and machinations of the hearings just as they do now, with the cutout's concurrence implicit.

Still looking at Lerner: Second, we learned that Issa and many of his fellow Republicans really want someone at the IRS to pay.

Lois Lerner, the retired former head of the Tax Exempt division who was in charge when the IRS mishandling of applications was revealed, is still the prime target of the panel. She twice refused to testify, citing her Fifth Amendment rights.

Issa et al still want to review her emails and documents. That, they say, is the only way to know for sure if there were political motivations in processing tax-exempt applications.

Tea Party and other conservative groups were first revealed to be targeted by "Be On Look Out," or BOLO, lists of political words. It subsequently was revealed that BOLO terms also were used to review more liberal and progressive applicants.

Issa made the legitimate point that the materials were produced on government time, from government facilities and with regard to the emails from a government account. The use of IRS assets, said Issa, whether strictly related to IRS work or whether Lerner "was shopping online" from her desk make it all a "product of the government and it is a given that it's open to review."

Privacy limit problems: But sifting through the emails that the Oversight committee is allowed to see is the key issue.

Koskinen told the members that he has given many of the documents in question to the House Ways and Means and Senate Finance committees because those members are legally allowed to see taxpayer data.

Members of the House Oversight panel, however, are legally barred from access to individual taxpayers' personal information. That means, said Koskinen, that every document must be reviewed by a legal expert before it can be redacted and handed over to the committee.

The panel, said Koskinen, is seeking millions of documents. Sorting through Lerner's emails alone, he said, means the IRS "will be at this for months, if not years, collecting that information, redacting it and then providing it."

Neither were Oversight members persuaded by data on the cost to comply with the committee's wide-ranging documents request, outlined in the panel's subpoena to the IRS.

"We've already spent 10 months, 15 million dollars and added 100,000 hours and 250 people working to produce the documents that we in fact agreed with the committee would be relevant to the investigation," Koskinen said. "I am anxious to get you the information, but it's a very complicated process. My guess is that there is no way we would get you this request totally before the end of the year."

However, Koskinen's suggestion that the panel narrow its focus was not welcomed.

Several accused him of stonewalling. And Rep. Kerry Bentivolio (R-Mich.) expressed doubts about Koskinen's explanations of the document review process, telling the commissioner, "I don't really believe you."

More contempt concerns: And the possibility of contempt of Congress was raised again.

Enacted in 1938, the contempt of Congress statute (2 U.S.C.A. § 192) states that any person who is summoned before Congress and "willfully makes default, or who, having appeared, refuses to answer any question pertinent to the question under inquiry" shall be guilty of a misdemeanor and subject to a maximum $1,000 fine and 12 month imprisonment.

The Oversight Committee is still considering the charge against Lerner. Now the new commissioner also is a target for the pace of complying with the subpoena.

"I think we have a strong case that we have been cooperative, continue to be cooperative, and anybody looking at the systems we have and the time it takes would find that we have provided you more cooperation than, in fact, might be expected," Koskinen said. "I think that, in fact, arguing and threatening contempt in that situation without understanding the circumstances is probably not going to be held up."

Even Issa, in the end, offered grudging respect.

"Mr. Commissioner, I appreciate you were treated well in some cases, and in some cases, our members went off topic," Issa said in closing the hearing. "You handled yourself incredibly well."

That couldn't be said for many of the lawmakers. But they and the commissioner will get more chances when Koskinen appears again (and again and again and ...) before the Oversight group.