Want to retire on your timetable? Contribute to your accounts!

"It says the husband gets to retire when he wants and the wife should just go along." 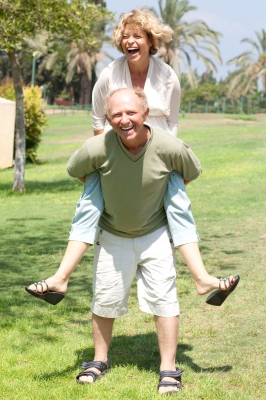 That was the hubby this morning, reading the New York Times article on how working couples cope when they don't retire at the same time.

That's why I keep him around. He's hilarious.

A shared sense of humor is crucial to making a marriage last. So is being able to talk about money. Like how much money you'll need to retire when each of you wants.

Making sure we get our rocking chairs on the same porch at the same time is a major topic for the hubby and me. We are not alone.

A recent telephone survey found that couples discuss retirement planning an average of 14 times a year.

Saving, but not enough: The Financial Freedom telephone poll sponsored by Capital One ShareBuilder also found that 72 percent of employed adults say they're contributing an average of 6.4 percent of their annual incomes to retirement.

But they know that's not enough. Overall, people who participated in the survey believe they should be saving about double that.

Most, 58 percent, said they plan to retire by the traditional retirement age of 65, yet nearly the same percentage fear that they'll never save enough.

Another 41 percent believe they are saving less than the average person their age.

"Unfortunately, saving for retirement is often put on the back-burner for what seem like more pressing financial priorities, such as paying for college," said Dan Greenshields, president of Capital One ShareBuilder, Inc. "Now more than ever, Americans are responsible for ensuring their own financial security during retirement, and the earlier you begin to plan and save, the better."

But still confident: Despite struggles to save for retirement, the Financial Freedom survey also found that most still-working Americans are more confident when it comes to making investment decisions, including those for their retirement accounts.

The percentage of workers confident about having enough money for a comfortable retirement was at record lows between 2009 and 2013, but increased this year.

The EBRI survey found 18 percent are now very confident, up from 13 percent in 2013, that they will have enough money for a enjoy a comfortable retirement. Another 37 percent are somewhat confident of having a big enough nest egg.

The EBRI study, however, also found that the confident folks were almost all those who had retirement plans, including IRAs.

Nearly half of workers without a retirement plan were not at all confident about their financial security in retirement.

Retirement plan limits: The takeaway from both polls and the New York Times article is that we all need to be socking away as much as we can right now in our retirement plans.

That includes our IRAs, traditional or Roth; any workplace plan, such as a 401(k); and/or self-employed retirement plans.

Today's Daily Tax Tip offers a look at the maximum contribution amounts to the various retirement plans. It covers both 2013, since contributions can still be made to some of the accounts this year for the previous tax year, and for the 2014 tax year.

Income contribution issues: Also keep an eye on your earnings.

When your income exceeds the top of the range for your filing status, you can't open or contribute to a Roth IRA.

Traditional IRA account owners also need to keep an eye on their income if they are hoping to take an above-the-line deduction for those contributions and they or their spouses have a retirement plan at work.

And either year, if you make more than the top phase-out amount for your filing status, you can't deduct your traditional IRA contribution.

The bottom line is don't just talk about retiring with your husband or wife, start or increase your contributions to all of your retirement savings. That way you and your spouse will have more time to talk about how to spend your time when you do quit working.