What the 'Taxman' does and doesn't collect

I'm old enough to remember many momentous things, including the storming of America by the British.

No, even though I'm a fan of Sleepy Hollow, I'm not that old.

But I am plenty old enough to remember 50 years ago when the The Beatles arrived in the United States. I was too young to attend a Fab Four concert, but my parents, younger brother and I did watch John, Paul, George and Ringo perform on The Ed Sullivan Show. 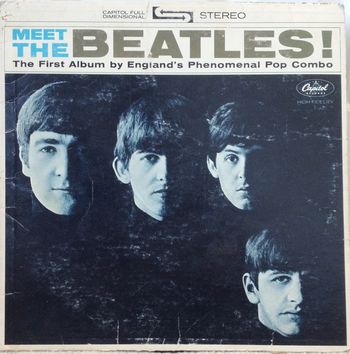 And my mom bought me Meet The Beatles! OK, so she listened to it as much as I did, but officially it was my record.

Yes, that's my beat up LP cover there. The vinyl disc is safely stored inside.

One thing that has bothered me all these years about this cover is that John's head is so much bigger.

Another interesting item on the cover is the announcement that it's "the first album by England's phenomenal pop combo." Actually, it was the group's second LP released in this country.

But the appeal of this record is that 11 of its 12 songs were written by one (or more) of The Beatles, as opposed to just six original songs on their first album.

Beatles everywhere! As the official 50th anniversary of the lads landing in New York City nears -- it was Feb. 7, 1964 -- millions of us are joyously strolling down nostalgia lane singing their songs.

The Big Apple has been holding special events all this week. David Letterman and Paul Shaffer have been celebrating on The Late Show this week with musical stars covering Beatles tunes. And it seems that almost every program is finding a way to include some 2014 version of Beatlemania.

The ol' blog is no exception.

While I have many, many favorite Beatles' songs, during high tax season the tune of choice definitely has to be Taxman.

Yeah, I know it's obvious. But c'mon. This first track on the Revolver LP is a great song that can't be ignored as we all struggle with our filing duties.

Plus, it's thoroughly insinuated itself into our popular culture.

Taxman was used in H&R Block commercials in 2002. It's in regular rotation between sessions at annual IRS Nationwide Tax Forums. It takes whacks at politicians -- British Prime Ministers Harold Wilson and Edward Heath -- for their roles in U.K. tax laws.

And Taxman has math. "There's one for you, nineteen for me," sings composer George Harrison. "Should five per cent appear too small, be thankful I don't take it all."

Taxman can't touch some things: Taxman popped into my head today when I realized that the Daily Tax Tip looks at what the Internal Revenue Service considers taxable and what escapes its grasp.

The good news is, despite appearances to the contrary, some things aren't taxed.

But other things aren't taxable. The problem here, though, is that many of the nontaxable income is from situations you wish you weren't in, such as court awarded damages for physical injury and associated emotional distress, disability payments, crime victim fund payments and relief grants following a disaster.

Still, check out all the taxable and nontaxable items and rules. You definitely don't want the taxman, in song or real life, getting any more of your money than he's due.