I am shocked, shocked that Rep. Dave Camp (R-Mich.) disagrees with those, me included, who have said his tax reform plan is DOA.

The chairman of the Ways and Means Committee made the media rounds following release of his comprehensive proposal to revamp the bloated U.S. tax code.

One of the stops was MSNBC's Morning Joe, where he detailed for co-host Mika Brzezinski the merits of his 979-page plan. 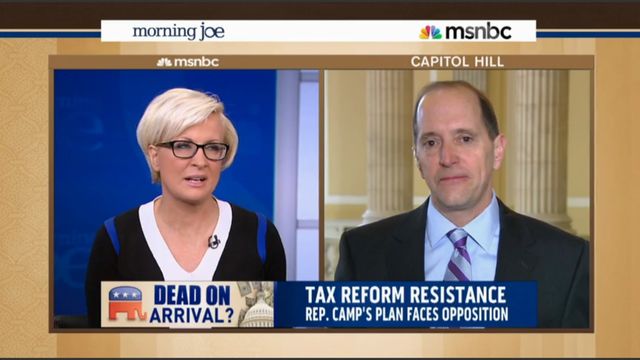 As my written impersonation of Capt. Renault indicates, I fully expected the Ways and Means chairman to defend his bill, or rather discussion draft as it's officially titled.

And as I mentioned both here at the ol' blog and over at Bankrate, Camp is to be commended for his years of work toward substantive tax reform. This latest step is a good starting point.

Tax trade-offs: Camp told Brzezinski that his proposal is designed to create the type of tax code that Americans want, one that is not beholden to special interests.

He also said that he's confident individuals and businesses would be willing to embrace the trade-offs included in the measure because they would produce a stronger economy.

"People aren't happy with the way things are and I don't think we should settle for 2-percent economic growth and median incomes declining and kids not being able to get jobs," Camp said.

Beyond the economic factors, Camp said his plan would dramatically simplify the tax code, something else Americans always say they want. "About 95 percent of filers would no longer have to itemize, so they'll be able to file the simple form," he said.

Many taxpayers (and their lobbyists) who would be affected by Camp's proposal are dubious, and vocally so, about the bill. Camp said he understands the criticism, but that he believes it was important to outline exactly what trade-offs are needed to lower rates and drive economic growth.

"So if they say, look, I don't like what you've done to reform this, then we say, OK, then what is your complete, comprehensive proposal, not just how do you change one piece of it. That's why it was so important to do everything all at once," Camp said.

Proposed tax rate changes: As I noted last week over at Bankrate, the Camp proposal holds much appeal for most individual taxpayers, especially when it comes to tax rates.

He wants to go from the current seven tax rates and income brackets to just three. Most of us would face tax rates of 10 percent or 25 percent. Wealthier taxpayers -- those making $400,000 as single filers or $450,000 if married and filing jointly -- would be taxed at the top 35 percent rate.

As the table in my Bankrate Taxes Blog post and the one below from the Washington Post's Wonkblog show, Camp's proposed 10 and 25 percent rates would replace the 15 and 35 percent maximums now faced by individual filers. 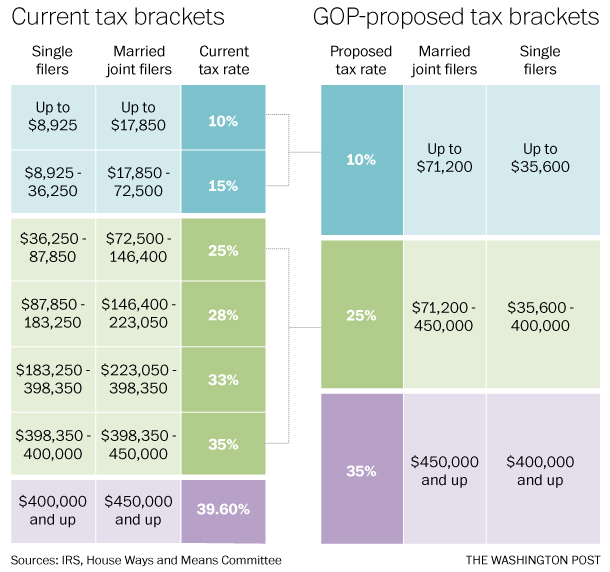 Wealthier taxpayers who now are taxed at 39.6 percent would enjoy a 4.6 percent lower rate under Camp's plan.

Will this happen? Camp might be right in the long term; at least some of his suggestions may eventually make it into law.

So I'll grant him that his tax reform plan is not DOA. But it definitely is on life support.

Additional tax talk: In addition to looking at Camp's tax revamp last week at my other tax blog, I also discussed the limited tax breaks for legitimate pot sellers.

Yes, marijuana is bringing in big bucks for Colorado, where recreational use of weed was approved by voters and went into effect on Jan. 1.

But those legal sellers of pot in the Centennial State (or any state for that matter) can't take advantage of the many business deductions because Internal Revenue Code § 280E prohibits such claims when they are in connection with controlled substances listed under the federal Controlled Substances Act.

Marijuana is on that list. So no business write-offs.

Legislation to change that is pending in Congress. There's no mention of this tax break disparity in Camp's proposal.

My tax thoughts for Bankrate are usually posted at that personal finance site each Tuesday and Thursday. If you happen to miss them then and there, check here on the weekend (or possibly earlier!) for a synopsis and links.

If you work in real estate, especially commercial real estate, his tax proposal looks like he is trying to get Congress to eliminate my job. Most distressing is eliminating like kind exchanges. It appears that he just moves all taxes deferred using 1031 exchanges into the revenue gained column. Does he really think that the same number of investors are going to now sell their properties and pay capital gains? This will be lost business, which equals lost revenue. Fewer transactions will equate to lower incomes for all people in the real estate industry and loss of jobs.