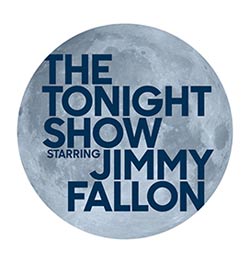 Jimmy Fallon, the new host of NBC's iconic The Tonight Show, was born in Brooklyn and grew up in Saugerties, about 100 miles due north of New York City.

After a brief stint on the West Coast, Fallon moved back to his birthplace, landed a job on Saturday Night Live and the rest, as the saying goes, is history.

Live weeknights from New York: So it's no surprise that Fallon didn't want to leave the town so nice they named it twice when he got his shot at helming late-night television's most popular network program. NBC executives agreed with the comic that it was time to bring The Tonight Show from Los Angeles back home to its New York roots.

And on Monday, Fallon debuted his version of the TV classic, taking his place in the 11:30 p.m./10:30 p.m. Central time slot behind, as he noted, "Steve Allen, Jack Paar, Johnny Carson, Jay Leno, Conan O'Brien and Jay Leno."

It was a fun show, perfectly encapsulating the comic's personable style and ability (or his booker's ability) to get big name stars and popular celebrities to participate in Fallon's variety-show style trademark skits. The bet-you'll-never-get-that-job payoff was a hoot!

Remember, Jimmy. Some Internal Revenue Service employees no doubt were watching so don't forget about the taxes due on your betting income!

The only question I have is how many former viewers recognized the parade of past and present stars/tabloid TV fixtures?

I suspect the identities of many of them eluded my mom and father-in-law, regular Tonight Show viewers in most of its earlier incarnations. But then, they aren't the demographic that NBC has now charged Fallon with bringing to that hour.

The first show was a big success. We'll see how it holds up and what Dave Letterman and Jimmy Kimmel might do to try to make inroads that were stymied during Leno's tenure(s).

Taxes in the move mix: But it wasn't just Fallon's love of New York and NBC's desire to make the most of its 30 Rock headquarters that got The Tonight Show transferred 3,000 miles east.

It was a 30 percent tax credit offered by New York State. Estimates are that the tax break, dubbed the "Jimmy Fallon Tax Credit" will provide NBC savings of $20 million a year.

Bloomberg chief Washington correspondent Peter Cook explains in the video above the tax savings that sealed the deal to get The Tonight Show back to New York City after more than 40 years in California.

And, Cook notes, the film and TV tax break war is heating up again.

Did you watch Fallon's Tonight Show debut? Will you keep watching?

On the tax front, do you think New York needed to create a new tax credit to get The Tonight Show back in the Big Apple? Or was NBC already committed and New Yorkers now are simply underwriting the efforts of a giant and prosperous corporation?