IRS takes a bite out of U.S. Olympic medalists' winnings

The photos are ubiquitous during the Olympic Games. Winners smilingly chomp down on their pieces of gold, silver and bronze. 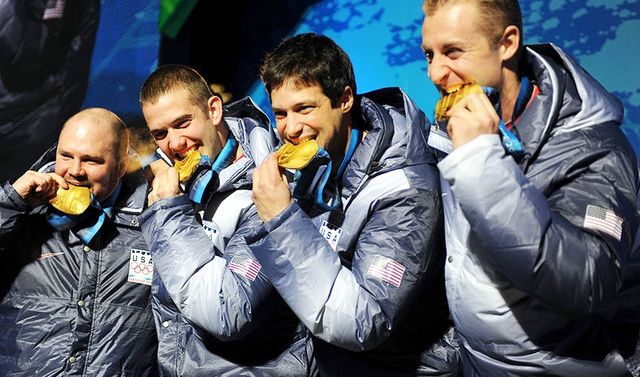 The Internal Revenue Service, however, literally takes a bite out of Olympians' winnings.

And with the 2014 Winter Games underway in Sochi, Russia, some members of Congress are once again arguing that the taxation is not right.

Those are nice chunks of change, but they actually are relatively paltry compared to some other countries promised remuneration for Olympic athletes.

The performance rewards from those countries are so large because the possibility of having to pay out is so small. Neither of these two countries won a medal at the 2010 Winter Olympics.

But even countries that are more likely to win also are offering up to six-figure payouts to medalists.

Still, the amounts are nothing to sneeze at and that's earned the U.S. gold medal payout of $25,000 this week's By the Numbers honor.

Americans for Tax Reform, the anti-tax organization headed by Grover Norquist, calculated the federal income tax medal winners could potentially face on U.S. Olympic Committee payouts. The value of the medals themselves are not included in the table below.

The actual tax will vary depending on which marginal income tax bracket the athlete finds himself in for 2014. The amounts also are based on federal income tax liability. Some athletes also could owe state income taxes.

Medal tax break bill reintroduced: Even if that doesn't happen, Rep. Blake Farenthold (R-Texas) thinks the idea of taxing Olympians who win medals and bring honor and recognition to the United States is wrong.

Farenthold has introduced H.R. 3987, the Tax Exemptions for American Medalists (TEAM) Act. It's identical to legislation introduced in the 112th Congress during the 2012 summer games in London.

Back then the 2012 presidential campaign also was being fiercely fought and Republican nominee Mitt Romney supported the tax break. It was just one of those crazy coincidences that the GOP candidate's wife owned an interest in a horse that competed in dressage at the London games.

H.R. 3987 would amend the tax code so that the value of any Olympics medal or any prize money paid by the U.S. Olympic Committee for such medals would not count as athletes' gross income for tax purposes.

"We need a fairer system for all, and eliminating this unnecessary tax burden on our athletes is a good way to start," said Farenthold in a statement announcing the TEAM Act introduction. "Our Olympic athletes are the true embodiment of the American spirit. As they represent our nation on the world stage in the upcoming Winter Olympics, they should be faced with our undying support, not with excessive taxes."