I was hoping for a blizzard during Super Bowl XLVIII.

I don't have anything against the fans who will be in MetLife Stadium for the first-ever outdoor NFL championship game played in a cold weather setting. I did, however, want to see the league's big wigs freak out a bit. 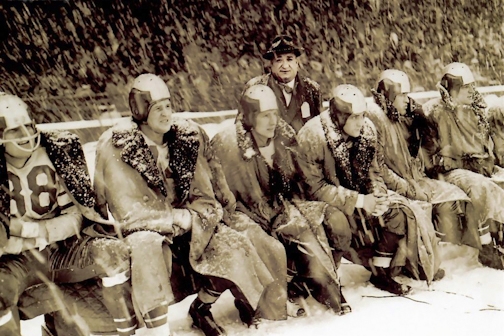 But the weather storyline has, as meteorologists say, moderated.

It now looks like the New Jersey/New York area won't be hit by extreme cold or wintry precipitation.

Still, Sunday's big game could be the coldest ever, according to data gathered by Bloomberg and put into graphic form by Statista. 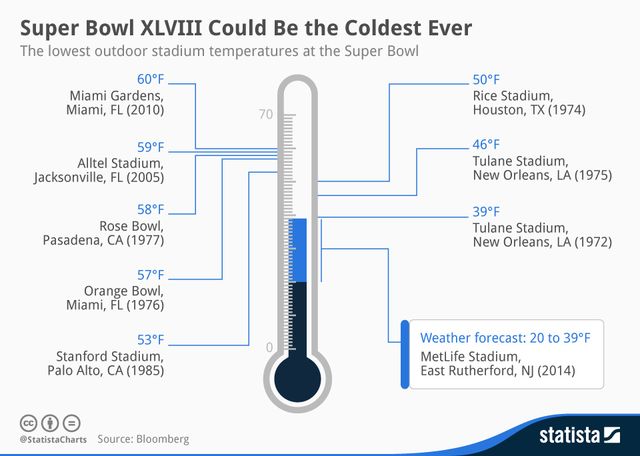 Wide open wagering: Sports books in Las Vegas are seeing money continuing to be dropped on Super Bowl weather related proposition, or prop, bets. One even reports six-figure wagers on temperature over and under lines.

Prop bets as everyone knows are those goofy wagers on just about anything that could happen before, during, after, in or around a major sporting event. The Super Bowl is Nirvana not only for sports fans and bettors, but also those of us who just like looking at all the weird betting speculation.

Forget putting any money on which team will score first, how, who will lead at the half, how many passes each quarterback will complete, how many they'll had intercepted and, ultimately, whether the Denver Broncos or Seattle Seahawks will take home the Lombardi Trophy.

We want to know, and bet on, things like the weather and:

Will Denver running back Knowshon Moreno cry during the National Anthem?

Which sidelines reporter, Erin Andrews on the Broncos sideline or Pam Oliver on the Seattle side of the field, will be shown on TV first?

How many times will Denver QB Peyton Manning say "Omaha" during the game?

Will Seahawks cornerback Richard Sherman be subdued or voluble in any post-game remarks, win or lose?

Who will the Super Bowl MVP mention first in his acceptance speech, God, his teammates, his coach, the fans or his family?

What kind of headwear will halftime performer Bruno Mars be wearing?

How many Red Hot Chili Peppers will be sans shirts during their part of the half-time show?

What color Gatorade will be poured over the winning team's head coach?

And since Colorado and Washington are the only states, so far, to legalize recreational pot, how many times will announcers mention marijuana?

Did your favorite prop bet make the list? If not, please share it with us in the comments.

Remember, too, that if any of your Super Bowl wagers pay off, the Internal Revenue Code classifies all gambling winnings as taxable income. You'll need your Super Bowl payout on your 2014 tax return next year.