Don't fall prey to the Dirty Dozen tax scams of 2014 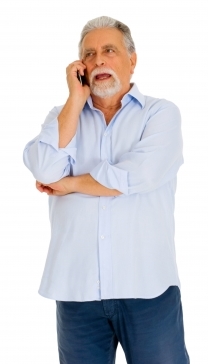 For many of us, our phones today are "smart." They are essentially handheld computers and we don't use them for actual speaking that often.

For tax crooks, however, phones are a vital tool.

In this ploy, folks get a call from someone purporting to be with the IRS who tells them that they owe Uncle Sam money and it must be paid promptly through a pre-loaded debit card or wire transfer. If the victim balks, the caller threatens them with arrest, suspension of a business or driver's license or, in the case of targeted immigrants, with deportation.

While this telephone attempt to steal money from taxpayers was a biggie, the IRS notes that it's just one of the many ways crooks use the telephone for nefarious purposes at tax time.

In fact, the IRS has seen a recent increase in a variety of local phone scams across the country.

Many scams, common ruses: Basically, the calling crooks either want to get money from you directly, as in last year's big phone scam, or they want to get your personal and financial information so they can steal your identity and use it to file for a fraudulent tax refund.

Also be on the alert for the possibility that the con artist caller has the final four digits of your Social Security number. Many places have gone to this truncated format to protect individuals' identities, but now crooks who are able to get that portion of this critical identifier use it to get folks to reveal all nine digits.

And look out for follow-up bogus IRS emails. Here the caller reinforces the perceived legitimacy of the call by sending an "official" message.

Don't participate in the scam: Remember, these crooks are playing on two common emotions, fear and greed.

They sometimes use the carrot of a larger refund to entice folks to reveal information. Or they use the stick of IRS and/or other official agency prosecution to get folks to comply with their deceitful requests.

If you get a phone call from someone claiming to be from the IRS, stop before you say anything. Remember, the IRS' first contact with taxpayers on a tax issue is likely to occur via old-fashioned Postal Service mail, not a phone call.

But when we are worried that we made a mistake or could be in tax trouble, we too often jump right in, offering information to clear up the feared problem. That urgency could make things worse.

Instead, if you know or think you owe taxes, hang up the fake call and place one yourself to the IRS at 800-829-1040. Real IRS employees at that line can help you with a payment issue ... if there really is such an issue.

If on the other hand you know you don't owe taxes or don't have a reason to think that you owe the IRS, then report the tax scam call to the Treasury Inspector General for Tax Administration at 800-366-4484.

Also let the Federal Trade Commission know that you were a target of a tax scam by using its online FTC Complaint Assistant. Add "IRS Telephone Scam" to the comments of your complaint.

12 top tax scams: These telephone tax scams are pervasive enough that they broke into the IRS' 2014 list of its Dirty Dozen tax scams.

Telephone scams are the number two scam on the latest annual list, falling right behind the returning top scam of general identity theft efforts and pushing phishing down to number three.

The other tax scams making the Dirty Dozen are:

You can read more about each of these scams in today's Daily Tax Tip, a slide show of the 12 tax scams to avoid in 2014.

And be careful out there. It's a trying enough just getting your taxes filed. Don't make things more difficult by falling for a tax scam.

Photo of man on mobile phone courtesy of Ambro|FreeDigitalPhotos.net