Getting married means lots of changes for the newlywed couple, even at tax time. That's when new husbands and wives file their first post-wedding federal Form 1040, choosing a new-for-them filing status.

Since the 2014 tax filing season, that decision has affected even more couples. That year marked the first time that same-sex married couples were able to file federal tax returns jointly or as married filing separately.

And that means that even more couples now encounter the marriage tax penalty or tax bonus. 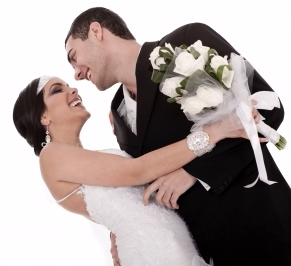 The tax price of love: Joint filing is the method most married couples, regardless of gender, use.

Sometimes, though, combining all your income on one Form 1040 can produce a bigger tax bill than if a pair was able to file as two single taxpayers and then total those individual tax bills.

When you do end up as a couple paying more than the total of the two tax bills you and your better half had pre-vows, it's known as the marriage penalty.

A quick digression on single vs. separate return filing statuses. Note that the marriage penalty measurement comes from comparing the tax due for the single filing status you used before saying "I do," not the married filing separately situation. It's never been a secret that filing two returns after the wedding usually costs more than filing just one, and not just from the tax bracket standpoint. Some tax breaks aren't available to married couples when they file separately. But as I said, I digress. Back to marriage penalties and bonuses.

Deduction history and problems: The marriage penalty typically affects dual-income spouses who earn close to the same amount. There are a couple of reasons why.

When the standard deduction was created, the amounts were based on the assumption that married couples generally share expenses and therefore live less expensively than do two single individuals, even if the singles make the same amount of money.

I don't know what lawmakers were thinking, but as any couple can attest, two people tends to mean twice the costs. But that's the mindset we were stuck with back then.

The progressive nature of the tax brackets also exacerbated this inequity.

Easing the marriage penalty a bit: The Bush-era tax law changes, which for the most part were made permanent with last year's American Taxpayer Relief Act (aka the fiscal cliff tax bill), helped ease the possible marriage tax penalty for many by addressing those issues.

Today's Daily Tax Tip offers you a way, thanks to the folks at the Tax Policy Center, to see just what your marriage tax penalty might be.

TPC's updated calculator lets you run the numbers for your 2016 taxes, as well as get a projection as to any possible marriage penalty or bonus in 2017.

Marriage bonus, too: What, you ask, is this marriage tax bonus I keep mentioning?

Just as its name indicates, it's a smaller tax bill or a bigger refund that a couple gets by filing a joint return as compared to their tax liability if they filed individual 1040s as single taxpayers.

A marriage bonus typically shows up when there's a large difference in spousal income. I've tried using this as an argument for me to totally quit working or go part-time while the hubby continues to bring home all or most of the bacon. He is not convinced.

And he has a point. There's more to life and love than taxes.

But it also is good to be forewarned in both!