In addition to the many dollar amounts that the Internal Revenue Service adjusts annually for inflation, a key figure that affects our taxes is the Social Security Administration's official contribution and benefit base. 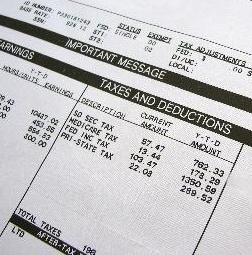 For us working stiffs, this is the amount of our income that is subject to Social Security taxation. This is part of the payroll tax, also known as FICA (short for Federal Insurance Contributions Act), that comes out of salaried workers' checks and goes toward the federal retirement benefits program.

The tax rate is 6.2 percent for employees with employer contributions matching that rate. The Social Security tax amount is calculated on a set amount of earnings each year, the aforementioned contribution and benefit base amount.

Tax cut-off level: A worker this who makes up to that amount would contribute a maximum of $7,254 in Social Security taxes from his/her pay this year. His/her company would match that amount.

But once the worker starts making more than $117,000, collection of Social Security taxes stops. (Remember, the Medicare portion of the payroll tax is an additional 1.45 percent on earnings from both workers and employer. There is no income cap on the Medicare tax. The total combined contributions are 15.3 percent.)

Few of us ever his the Social Security earnings limit, so that tax comes out of every single paycheck we get each year.

Some American workers' annual incomes, however, do exceed the cap, so they get a few Social Security tax-free paychecks each year. Many, many, many years ago the hubby's income hit the earnings cap when the threshold was much lower.

Minuscule tax for some: And a handful of very wealthy workers have or soon will be done with their 2014 Social Security tax responsibilities.

Income inequality is the new economic and political issue. It's these really rich folks for whom the Social Security tax is a just a minor irritation. In fact, many of them have already met or will soon hit the 2014 earnings limit.

Social Security Administration wage statistics for 2012, the last year for which the agency has available data, show that 2,021 people two years ago received net compensation of more than $10 million.

For this post's illustrative purposes (and based on recent data), let's use that same number of individuals for 2014. And while I know folks who are in this income strata tend to get a lot of unearned income from investments, for ease of calculating, let's also say the full amount is subject to the Social Security tax.

Those 728 in 2012 who made $20 million or more and the 166 that year who raked in at least $50 million met their Social Security withholding amount before the weekend.

Why the earnings limit? All these numbers are fun to fiddle with, but they also point up a common question -- and complaint -- about the Social Security earnings limit.

Basically, why is the Medicare tax amount unlimited for tax purposes but the Social Security portion has an earnings cap?

Kevin Whitman and Dave Shoffner of the Social Security Administration's Office of Retirement and Disability Policy, Office of Retirement Policy, explain in the brief, The Evolution of Social Security's Taxable Maximum. Social Security has featured a taxable maximum since its inception, write Whitman and Shoffner, even though the tax max, as the amount is sometimes called, was not included in the plan drafted by President Franklin D. Roosevelt's Committee on Economic Security.

In 1937, payroll taxes applied to the first $3,000 in earnings. From 1937 to 1975, Congress increased the tax max on an ad-hoc basis. Increases were justified by the desire to improve system financing and maintain meaningful benefits for middle and higher earners.

Since 1975, the tax max has generally increased at the same rate as average wages each year. In wage-adjusted dollars, say Whitman and Shoffner, the tax max has remained roughly constant since the mid-1980s.

As for those who go over the earnings cap, that percentage of workers fell from 15 percent in 1975 to about 6 percent in 1983 and has remained at that level since.

Unsuccessful efforts to change it: Some legislators and policy makers regularly propose increasing the tax max beyond wage-indexed levels to help restore financial balance and to reflect growing earnings inequality.

The main argument here is that workers earning more than the maximum taxable Social Security amount have experienced higher earnings growth rates than other workers in recent decades.

There is precedent for raising the cap. In 1972, lawmakers provided for automatic increases to help pay for cost of living adjustments in program benefits. And in 1977 they raised the base beyond the new automatic level to help improve the program's overall financial condition.

But these changes were specifically tied to helping shore up Social Security finances. That's a continuing concern among Americans of all ages, but much of the focus on Capitol Hill in recent years has been to cut benefits instead of raise any taxes to help guarantee the retirement program's solvency.

Another approach that's received bipartisan political support is to use the so-called chained Consumer Price Index (CPI) to determine the annual Social Security cost-of-living adjustment (COLA). COLAs would be lower with the chained CPI and could dramatically affect recipients benefits over the longer term.

Most support higher or no cap: A survey last year by the National Academy of Social Insurance found that most individuals, regardless of their political party affiliation, agreed on ways to strengthen Social Security without cutting benefits. Seventy-one percent of Republicans and 97 percent of Democrats surveyed by NASI supported increasing Social Security taxes on better-off Americans.

The most-favored option offered by the survey included a call for eliminating over a 10-year phase-out period the cap on earnings taxed for Social Security.

You can count me as a supporter of this proposal. But will I and the NASI poll participants get our way? Probably not soon.

Pardon my cynicism, but Congress tends to listen more to those PAC-money-contributing folks. And the big campaign contributors tend to be those who earn way more than enough money to very quickly get past the Social Security earnings cap.

Actually, I've had plenty of jobs thanks to folks who weren't rich, just willing to help others make a living. And Merry Christmas to you, too!

Why do you hate rich people? When was the last time a poor person gave you a job. Just saying. Oh and Merry Christmas.