I'm a big believer in you get what you pay for. Apparently, so is National Taxpayer Advocate Nina Olson.

Olson this week released her annual report to Congress. In the yearly analysis, the Internal Revenue Service's internal watchdog details at least 20 of the biggest problems that taxpayers face.

For 2013, Olson enumerated 25 taxpayer troubles. And she put the inability to get good service from the IRS near the top of her latest list.

One of the most frustrating taxpayer-IRS interactions is telephone service. Folks seeking answers via phone are getting worse service now. 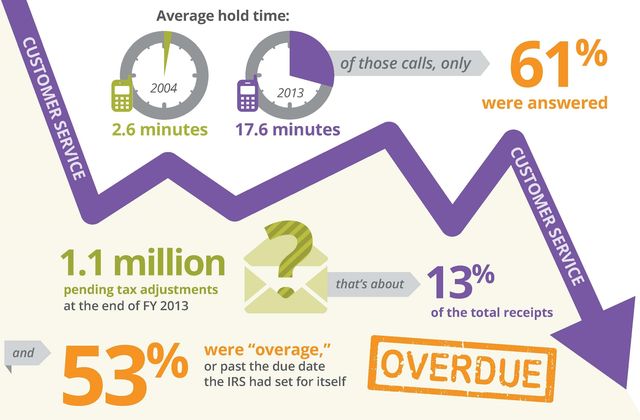 And why is there such a decline in IRS service to its taxpaying customers, via phone and otherwise?

A key reason, says Olson, is that the IRS simply doesn't have enough money to do its job properly.

IRS underfunding and its negative effects on taxpayers came in number two on Olson's 2013 problem list, up a spot from her 2012 tally of taxpayer troubles.

Not enough money: Olson didn't mince words in her 2013 analysis, titling the discussion of this second most serious taxpayer problem The IRS Desperately Needs More Funding to Serve Taxpayers and Increase Voluntary Compliance.

The mission of the IRS trumps the missions of all other federal agencies, says Olson.

-- National Taxpayer Advocate Nina Olson in her 2013 report to Congress

"If the IRS lacks adequate funding to do its job effectively, the government will have fewer dollars available to fund all federal programs, including national defense, Social Security, Medicare, Veterans' benefits, medical research, and disaster relief — or simply to reduce the deficit," according to Olson.

But, the National Taxpayer Advocate notes, since fiscal year 2010, the IRS budget has been cut by nearly eight percent. Inflation has risen by about six percent over that same time frame, further eroding the IRS' resources.

These budget reductions mean, says Olson, that the IRS has been significantly hampered in its ability to provide top quality service and maintain effective enforcement programs that minimize noncompliance.

It's a point Olson has made before.

The cost of IRS budget cuts: Olson's support of funding for the IRS comes at a time when some in Congress have threatened to cut the agency's budget even more.

The cuts are not only part of an overall budget deficit focus in Washington, D.C., but also as a way to make political points.

The possibility of withholding IRS funds was raised repeatedly during hearings last year on the agency's handling of 501(c)(4) tax-exempt status applications by nonprofit groups.

Such budgetary threats, however, will do more harm than good according to Olson.

She called recent Congressional cuts to the IRS budget shortsighted and counterproductive.

From the pure dollar perspective, Olson says that each dollar appropriated for the IRS generates substantially more than one dollar in federal revenue. 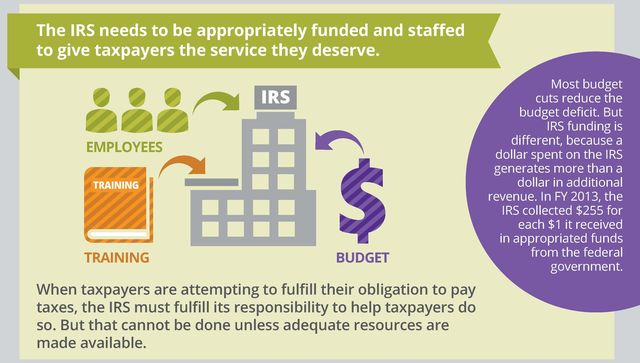 The marginal return on investment of additional IRS funding will not be nearly so large, writes Olson, "but virtually everyone who has studied the IRS budget has concluded that it is positive."

Olson says that Capitol Hill also must stop applying budget rules that were designed for classic spending programs, namely that a dollar spent increases the federal deficit by one dollar.

"As the government's revenue collector, the IRS is the only significant exception to that rule," writes Olson. "A dollar spent generates substantially more than one dollar in additional revenue and thus reduces the deficit."

This is the same message former Acting IRS Commissioner Daniel Werfel and most of his predecessors took to Congress.

A similar stance is expected from new IRS Commissioner John Koskinen. At his first press conference after taking over as IRS chief, he acknowledged the agency's budget challenges.

He also mentioned the service trade-offs that a reduced IRS budget requires. Less money, Koskinen said, means the difference between running a fuller menu of taxpayer services (many of which will be more automated this filing season) and robust enforcement efforts.

And during his Senate Finance Committee confirmation hearing in December, Koskinen noted that while there is no proven causation between the amount of funding the IRS gets for enforcement and what it collects, the roughly $1 billion the agency lost in funding correlated with an $8 billion drop in enforcement revenues.

Will this be the year that Congress listens to IRS leaders and the Taxpayer Advocate when it comes to IRS finances?

I doubt it. It is an election year and parsimoniousness plays well in many Congressional districts.

But at least more people are getting the word out that the adage "you get what you pay for" applies just as much to government services as it does to our personal purchases. And on a much larger scale.

Well, not having enough money is typicaly to many spheres of our lifes, IRS is not an exeption. But this shortage cause taxpayers' dissatisfaction and leads to distrust of all tax system.