Where do your residential property taxes rank nationally? 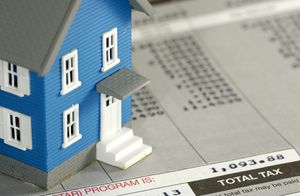 As I flipped my desk calendar page to December, there it was. Our 2013 residential property tax bill.

It's not due until Jan. 31, 2014, but we usually pay our real estate taxes before the end of the year so we can deduct it.

That itemized deduction is about the only good thing about property taxes.

Oh, I know, those are the taxes that primarily fund public schools. I am a big fan of the public school system.

But despite rising tax rates and increased home values, at least here in my corner of Texas, schools always seem to be out of money.

Who's to blame and possible solutions could fill a separate blog post. Heck, the topic could feed a dedicated school funding blog. So I won't get into that debate here.

But that issue, that folks feel like they are fruitlessly feeding a voracious tax monster, is one of the reasons that the property tax always makes most-hated-tax lists.

Another reason we hate getting that county tax assessor/collector's statement is that for most of us it's a big bill that comes all at once, rather than incrementally. That's always a shock, even if you're expecting it.

Property tax burdens nationwide: A recent study of residential property taxes in the United States by the Urban-Brookings Tax Policy Center (TPC) notes that the property tax burden "is substantial, making up about one quarter of homeownership costs."

And where is it the most substantial tax burden?

That would be in the northeast. Specifically, says the TPC study, the counties with the highest property tax burdens tend to be in New York and New Jersey.

That's why, reports the New York Post, Gov. Andrew Cuomo has promised to aggressively push for state tax cuts in the coming 2014 legislative session. He pledged specifically to focus on property taxes, which he described as a "crusher," especially in the suburbs and upstate. 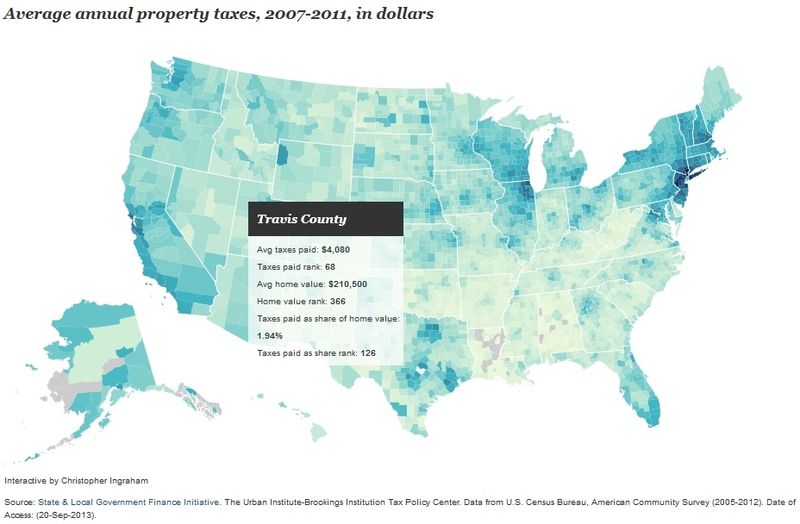 That's a higher percentage of home value-to-taxes than we would have paid if we'd stayed in our previous properties in Maryland or Florida. The home values were a bit higher in Palm Beach County, where we lived before heading back to the Lone Star State in 2005, but that Sunshine State county only gets 1.13 percent of value in taxes.

Florida also has limits on the amount of appraised value of your home each year based on the year after you receive a homestead exemption. That exemption and subsequent assessment cap can make a big difference on what your real estate taxes will be.

That was particularly evident when in 2005 we sold our Palm Beach County house that we had bought in 1999. Because we purchased it before the run up in home prices, we got a relatively good deal over the years on our property taxes.

Our home's new owner, however, started with a higher property value assessment and a tax bill that was three times what our last one was thanks to the way home prices had appreciated back then.

Of course, we got the payback when we bought here in Texas and faced much higher property tax bills than we'd paid while in the Sunshine State. 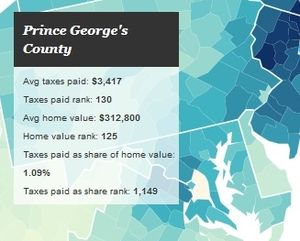 As for our homes in Maryland (we had three; successively, not all at the same time!), during the years the data was collected the Old Line State's county tax collectors got 1.09 percent of a home's value in taxes.

Since the value of residential property was higher, the Prince George's County tax office got $3,417 in average taxes on the average home value of $312,800.

The reason for such high home values during a time prices were dropping? Part of it is because Prince George's County shares a border with Washington, D.C. The demand for homes closer to the nation's capital helped make for a smaller real estate bubble there.

And yes, in Maryland we also paid state and country income taxes that don't exist (yet ...) in Texas and Florida.

The power of property taxes also was the topic last week at my other tax blog.

Since it was Thanksgiving week, that was my only post over at the Bankrate Taxes Blog.

If you miss my additional tax thoughts at that personal finance website, usually on Tuesday and non-holiday Thursdays, you can find a synopsis here on the ol' blog the following weekend.

Or the following week if I'm still catching up from my holiday break.

I agree with Terry. If you own real estate you'll have to pay property taxes, however, some states have much higher property taxes than others. And it’s true…In New Jersey, New Hampshire, Texas, Wisconsin, Nebraska and Nebraska homeowners paid the most in property taxes compared to home value. Also I have read about other three of the country's top five highest-taxed counties Westchester, Nassau and Rockland that are in New York state. When there's an emphasis on local government, it often means there's an emphasis on property tax. Sometimes a county's high property tax rate has little to do with home values. In states where the federal or state government owns a big portion of the land, property taxes are concentrated in the privately owned segments of the state, and are typically high.