Missouri is one of 34 states that prohibit same-sex couples from getting married. 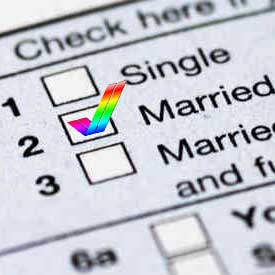 But lesbian and gay couples who married in a jurisdiction that does recognize their unions (15 states plus the District of Columbia) and now live in Missouri will file their 2013 state tax returns as married taxpayers.

Missouri's tax sanctioning of same-same marriages is thanks to an executive order issued last week by Gov. Jay Nixon.

The Internal Revenue Service and U.S. Treasury announced in late August that same-sex married couples now must file a joint Form 1040 or two returns as married filing separately regardless of the marriage law of the state where they live.

The tax filing ruling came after the Supreme Court decided in June that a portion of the federal Defense of Marriage Act, or DOMA, was unconstitutional.

Treasury and IRS said the broad filing interpretation was made to provide certainty and clear, coherent tax filing guidance for all legally married same-sex couples nationwide. It applies for all federal tax purposes, including income and gift and estate taxes.

"Missouri is one of a number of states whose tax code is directly tied to that of the federal government and under Missouri law, legally married couples who file joint federal tax returns with the IRS must also file joint state returns with our state Department of Revenue," Nixon said in a statement issued in conjunction with his filing order.

"As a result, accepting the jointly-filed state tax returns of all legally-married couples who file federal returns is the only appropriate course of action, given Missouri statutes and the ruling by the U.S. Department of the Treasury," said Nixon.

In other states that do not recognize same-sex marriage but do collect state income tax, gay and lesbian married couples will continue to hassle with their state tax returns. In most of these cases, they'll have to fill out mock single status federal 1040s to use in filing their state returns that rely on federal filing data.

WHEREAS, following the United States Supreme Court's decision in United States v. Windsor, 570 U.S. ___, 133 S.Ct. 2675 (2013), the Internal Revenue Service issued Revenue Ruling 2013-17, in which it announced that "[f]or Federal tax purposes, the terms 'spouse,' 'husband and wife,' 'husband,' and 'wife' include an individual married to a person of the same sex if the individuals are lawfully married under state law, and the term 'marriage' includes such a marriage between individuals of the same sex"; and

WHEREAS, the Internal Revenue Service has announced that, under Revenue Ruling 2013-17, same-sex couples legally married in a state that authorizes such marriages, regardless of their place of domicile, may file a joint federal individual income tax return; and

WHEREAS, the tax code of Missouri is coupled to the federal tax code, and Missouri tax filers are required to utilize information from their federal tax return when completing their Missouri state income tax return; and

WHEREAS, section 143.031.1, RSMo, mandates that "[a] husband and wife who file a joint federal income tax return shall file a combined [state] return"; and

WHEREAS, the Department of Revenue, under section 143.091, RSMo, must apply the same meaning to the phrase "husband and wife" as is applied under federal law pursuant to Revenue Ruling 2013-17; and

Essentially, Nixon's order means that any federal exemptions or deductions available to married couples that are reflected in their federal adjusted gross income also will be reflected on their state tax return. The order does not, however, change eligibility requirements for any state-level exemptions, deductions or credits.

"Once again, Governor Nixon is trying to play to all sides of every issue, indulging his liberal ideals while hedging his bets by saying the courts have forced his hand. The Governor's job is to defend our state's constitution – including the constitutional amendment defining marriage as between one man and one woman, that was passed overwhelmingly in this state - not to surrender to the whims of the Obama administration. This executive order is nothing but an attempt to violate the voters' will, unlawfully ignoring a constitutional amendment to provide the Governor's liberal allies a policy victory."

"Governor Nixon appears to be following the requirements of Missouri law on tax filing, as passed by the legislature," Koster said via a statement issued by a spokeswoman. "The Attorney General's role is to defend such state laws to the extent possible, and not to presume that our legislature's actions violate our state's constitution." 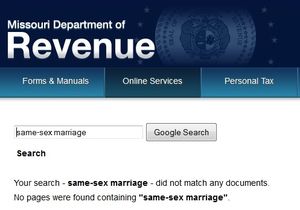 No word from Missouri tax officials: There's been no acknowledgement yet of Nixon's order by the Missouri Department of Revenue.

When I did a search this morning of the state tax website for same-sex marriage references, I got zero results.

I'm not surprised and I'm not knocking the Missouri tax officials. Nixon's order was just issued last Wednesday. I'm sure the state's tax personnel are examining what they have to do to their forms and services to comply with the governor's marriage equality decision.

I also suspect that some bills questioning the executive order will be filed in the next session of the Missouri legislature. They might actually pass, given that it will be an election year.

But Nixon would no doubt veto anything that would alter his state tax return filing status edict.

I'm sure the Missouri tax office would support the governor on that account. There's no way that office wants changes made in the middle of filing season.

I believe Missouri is now in the same category as Wisconsin for recognizing all legal marriages conducted in any state. However, I think that state tax returns in Nebraska must follow the marital laws for domicile in that jurisdiction. I'm losing track of all the state decisions. Will you publish a chart of the tax filing status for same-sex couples in each state? I could really use that in January when tax season starts.