Mexican lawmakers have finally hammered out a budget that includes a one-peso-per-liter, or about 8 cents U.S., tax on sugary beverages and an 8 percent tax on fast foods.

The country's lawmakers and health activists hope that the new charges will help the country's residents lose not only weight, but also the unwanted title of the world's most obese nation.

The legislative action has earned at least one piece of positive recognition. It's made 8 the winner of this week's By the Numbers honor.

The tax is a crowning achievement for Mexican President Enrique Peña Nieto, who proposed it as part of his anti-obesity crusade. In addition to the sin tax on unhealthy eating and drinking habits, Peña Nieto is calling for a "change of culture" in his country, including the incorporation of at least an hour of exercise for all Mexicans every day.

Sweet loopholes: Such added weight management measures likely will be necessary since the Coke tax might not reduce the amount of sweetened beverages Mexicans drink.

Instead, say some analysts, the tax is more likely to simply make Mexican buyers shift from one product to another.

Sugar-sweetened beverages will be subject to the tax, but drinks sweetened by artificial sweeteners and drinks naturally containing sugar, namely 100 percent fruit juice, will not be affected, says Euromonitor International. Plus, yogurt and milk drinks will not be affected because their nutritional value.

Higher border taxes: Another controversial element will raise sales taxes in the northern Mexican border states from 11 percent to 16 percent.

Mexico already has a 16 percent sales tax, but for the last 20 years it's been lower in states bordering the United States to prevent them from going across the international line to spend their money. The Mexican tax increase in those regions could benefit merchants in U.S. border towns.

MexiCoke in danger? But the big issue for many U.S. cola connoisseurs is the fate of their beloved Mexican Coca-Cola. 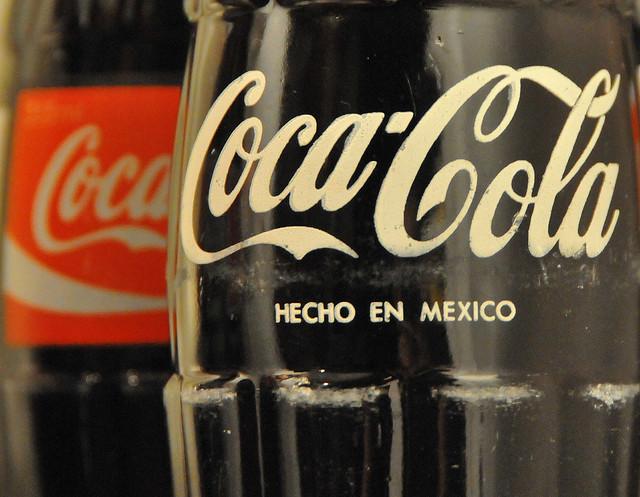 Coke produced south of the border is a favorite here in Texas. It first appeared in the United States in 2005 in old-fashioned glass bottles targeting immigrants as part of a nostalgia marketing campaign. It succeeded beyond that market.

At our last visit to our favorite taco stand, Mexican cola was one of the beverage choices. And I can pick up bottles of Mexican Coca-Cola at my local grocery store.

I do buy the imported cola now and then as a special treat. It's the flavor I grew up drinking. And it still tastes better than the current American counterpart because the Mexican version uses cane sugar instead of high-fructose corn syrup. U.S. Coke began phasing out cane sugar in the early 1980s; by the middle of the decade, most bottlers had completely switched to corn syrup.

Offsetting tax with corn syrup: Will the new soda tax prompt Mexico's Coca-Cola makers to shift to cheaper corn syrup? That possibility was mentioned on a recent earnings call with Arca Continental, the second-largest bottler of Coca-Cola in Latin America.

"It is a very important part of the savings that we are foreseeing now," Francisco Garza, spokesperson for the company, told analysts.

It looks, however, like we real Coke fans in the United States won't have to worry.

While bottlers in Mexico already use a mix of high fructose corn syrup and cane sugar for Coca-Cola sold in that country, Arca Continental said in a subsequent statement that it has no plans to change the sweetener for the Coke it exports to the United States. U.S.-bound Mexican Cokes will continue to contain 100 percent cane sugar.

Does that then mean, asked Quartz business writer Matt Phillips "If Americans get #Mexicoke made with real sugar, and Mexicans don't, does that make it Americoke?"

Good question, Matt. But I don't care what you call it as long as Mexico just keeps sending that better tasting Coke up north!