Be on the lookout tax preparers. If you were sloppy in seeking the Earned Income Tax Credit (EITC) for your clients, you could be soon hearing from, both via correspondence and in-person visits, the Internal Revenue Service.

The EITC is one of the most expansive uses of the tax code to fight poverty. It was created in 1975 as a way for lower-paid workers to offset the Social Security taxes that take a relatively big bite out of their paychecks.

The EITC also is problem every tax-filing season.

Not only does it confuse taxpayers who might qualify for it, but it's a filing hassle for tax professionals who submit returns for clients seeking EITC money as well as for the IRS as it processes and checks the claims.

To ensure that the credit is paid properly, the IRS is stepping up its oversight of tax professionals involved in such claims through the end of 2013.

EITC eligibility rules: The EITC is worth more for taxpayers with children, but it can be claimed by individuals who don't have kids. As long as you meet the income (and qualifying child) requirements, you can claim it.

For the 2013 tax year, the EITC earning thresholds are:

The maximum EITC amount available for 2013 claims is:

Since the EITC is a credit, it offsets a taxpayer's IRS bill dollar for dollar. If you, a single taxpayer, gets $487 and your tax bill is $500, you'll only owe the Treasury $13.

Plus, it's a refundable credit, meaning you could get money back. If a single taxpayer has a $400 tax bill and gets the maximum EITC amount for that filing status, he'll get an $87 tax refund. 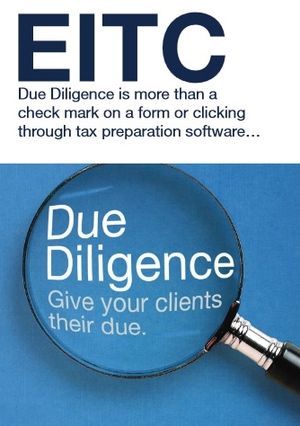 EITC issues, fraud-fighting efforts: But the EITC has some downsides.

It can be difficult to determine whether you and your kids qualify and many people who might be eligible can't afford professional tax help to sort out EITC issues.

One major concern is the EITC "sweet spot." You must earn some income to claim the credit, but not so much as to disqualify you.

So folks, and some tax preparers, sometimes fudge income levels and the children who are claimed in connection with the EITC.

The IRS ramped up EITC due diligence in recent years because of continuing concerns about abuse of the tax credit.

To combat EITC errors and flat-out fraud, the IRS has required since 2012 that tax professionals complete Form 8867, Paid Preparer's Earned Income Credit Checklist, and file it with the IRS when making EITC claims.

Filing follow-ups: The IRS has found, however, that some preparers are not following the rules as they should.

So it has issued a blanket notice to all tax practitioners that during November and December it will be sending letters to those it suspects of filing inaccurate EITC claims.

"The letters detail the critical issues identified on the returns, explain the consequences of filing inaccurate claims for EITC and advise preparers that IRS will continue monitoring the types of EITC claims they file," notes the IRS email alert sent to tax preparers.

The IRS also reminds tax pros of the consequences of submitting inaccurate EITC claims: a penalty assessment, revocation of IRS e-file privileges and "other consequences," including being barred from further tax return preparation.

And in addition to the warning letters, the IRS also announced that it will conduct visits to some tax preparers.

The in-person contacts, says the agency, are to "provid[e] education and outreach on meeting EITC Due Diligence requirements."

EITC one of the costliest tax breaks: The EITC regularly makes the list of tax breaks that cost Uncle Sam money.

The IRS estimates that as much as a quarter of all EITC claims contain some type of mistake. The cost of these errors in 2013, says the agency, was between $13.3 billion and $15.6 billion.

The Joint Committee on Taxation, in its February 2013 update of the costs of tax deductions, tax credits and exclusion of income from taxes, calculated that between 2013 and 2017 the EITC will cost the U.S. Treasury around $326 billion.

The EITC is just one of 8 popular but costly tax breaks that come to a total of $3.5 trillion in potential lost tax revenue.

Those tax breaks also are this week's Weekly Tax Tip.

Some of them are being looked at for revision or elimination as Congress explores ways to cobble together a fiscal year 2014 budget and/or tax reform.

But it's not very likely that Representatives and Senators will be willing to mess with any of them, at least not substantially, in the 2014 election year.