After a great 7 and 0 start, my Texas Tech Red Raiders have stumbled a bit. Going into today's game with Kansas State, they were 7-2. As I type, it's still early in the second half, but right now it's looking like we'll fall to 7-3. 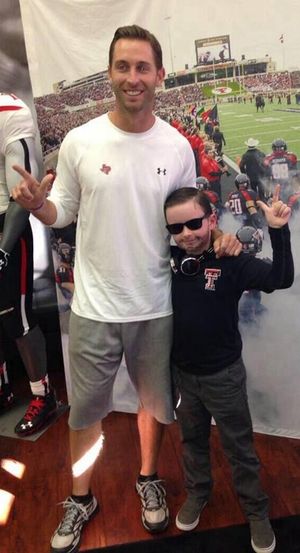 Still, Tech fans are thrilled with the possibilities that arrived when former star quarterback Kliff Kingsbury (pictured with a young fan paying Halloween costume homage to his favorite coach), who set multiple school records when he was a Double T quarterback, took over as head coach this season.

I won't bore you with the convoluted gridiron soap opera that led to Kingsbury's arrival. But the departure of the controversial, at least in Lubbock, of Tommy Tuberville opened up the head coaching opportunity for the South Plains' own Coach K.

Schools often convince coaches to make the move by buying out their contracts.

In doing so, the universities traditionally have viewed the payments on behalf of the new coaches to be taxable income to the coaches.

Two tax law professors, however, tell USA Today that the contract buyouts are a non-taxable business expense. But they acknowledge that the Internal Revenue Service may not agree.

The buyouts -- and related taxes -- are not inconsequential.

USA Today reports that last year the head football coaches of 11 major public universities broke their contracts to take jobs at other public schools; in doing so, they faced responsibility for more than $7 million in buyouts.

Under federal tax law, notes the newspaper, no one disputes that an employer's payment of an employee's personal obligation must be treated as taxable income to the employee.

The two law professors acknowledged in a 2007 article on coach contract buyout tax issues that their tax position is "vulnerable to dispute by the IRS." But the pair told USA Today that they believe a coach who litigated any IRS challenge would prevail.

So football and tax fans, what say you? Who's responsible for the taxes on coaching contract buyouts?

Now at Cincinnati, $943,000 of Tuberville's $3.143 million salary is related to the buyer payment he owed Texas Tech when he left.

Mike Gundy of Oklahoma State makes $3.45 million and is ranked #11. Staying in the Sooner State, Bob Stoops of Oklahoma is #5 thanks to his $4.77 million salary.

Here in my current hometown of Austin, University of Texas head football coach Mack Brown is #2 on the USA Today list with his $5.45 million salary. His contract provides for annual pay bump of at least $100,000.

The man whom some UT fans want to take Brown's place is the highest paid college football coach. Nick Saban gets $5.54 million from Alabama.

Alabama supporters say Saban's worth it since he's guided the Crimson Tide to three national championships. If he manages to even just get the team into the title game this season, bonus payments will push Saban's income past $6 million.

I hope he has an equally good tax accountant, especially if he does relocate to UT -- some here in Austin say/hope the change could come as early as next season -- and a contract buyout is involved.

Brian, not to speak for the law profs or USA Today, but I believe the meaning is that now the law has always been applied so that the coaches are responsible, but that if one of them and/or their schools wants to challenge the law, the profs think they could win. I, like you, believe the profs are wrong. But it would be a fun Tax Court trial. I doubt anyone will be willing to hassle with it, though.

Maybe I’m too busy watching football to simultaneously read a tax article and understand the issue. At one point the article states that payment by the school to the coach is indisputably taxable income for the employee. Then, the article states that some law professors believe the school is making a tax-free reimbursement to the coach. Those statements are contradictory.

Anyway, I believe the coaches clearly are receiving taxable compensation for their services. I’m fairly certain that – except for de minimis amounts and employee service awards of limited quantities – qualified tax-free reimbursements are only allowed for expenses paid by employees that would have been deductible expenses of the employer if the employer had paid them directly. That is not the case when one school buys out the contract of a coach at another school. An ordinary and necessary business expense is not giving money to another organization so that it will release its employee from a contractual obligation.