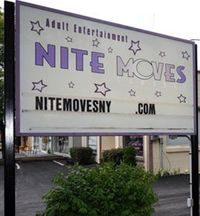 Attorneys for the Latham, N.Y., club have been in courtrooms for more than two years arguing that Nite Moves' employees' lap dances deserve the same sales tax exemption as other Empire State dramatic or musical arts performances.

The legal battle ended, however, on Tuesday, Oct. 15, when the U.S. Supreme Court refused to hear the case.

That means the 4-to-3 decision against Nite Moves last fall by the Court of Appeals, the top court in New York, stands.

That also means the New York tax collector now expects the club to remit the $124,921 in sales taxes, plus interest, the state says Nite Moves owes on patron admission charges from December 2002 through August 2005.

Free speech instead of taxes: While Nite Moves' owner Stephen Dick, Jr., obviously didn't want to pay the sales taxes, that was not the basis used by the gentlemen's club in its petition to the U.S. Supreme Court.

The club had hoped the United States' top legal panel would take the case because, Nite Moves attorneys argued, the tax was a violation of the constitutional right of free speech. The high court petition questioned whether New York had the right "to selectively administer a tax exemption for dramatic or musical arts performances in a way that imposes a higher tax on content that a government functionary disfavors."

But both the tax and First Amendment arguments were all for naught.

The Supreme Court denied certiorari, which is the official phrase for refusing to hear a case. Having cert denied isn't a comment on the merits of the case; it just means that not enough justices decided it worthy enough to be taken up by the court.

Next legal, not dance, steps: Club owner Dick, however, is not giving up.

He says that another audit of the club is coming up and he plans to go back to an administrative law judge armed with lessons learned in this lost legal battle.

And as much fun as it would have been to hear the Supreme Court justices examine the artistic merit of exotic dancers -- I'll let you come up with your own list of Antonin Scalia questions for attorneys during oral arguments -- we at least have Stephen Colbert's selection of the Nite Moves owner as a "difference maker" for his legal battle to have stripping regarded as an art form.